skip to main content
Return to Fordham University
You are at:Home»Arts and Culture»Time-Honored Creativity Shines in Matters of the HeART 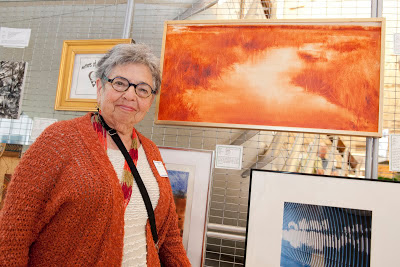 Elaine Finsilver was 19 years old when she moved to the city to be a dancer and an artist. Her 21-year-old roommate Andy Warhol was pursuing similar dreams.

“Call it my 15 seconds of fame,” said Finsilver, now in her 80s and an artist and art teacher at one of Westchester’s Jewish Community Centers. “Andy was an inspiration to me.”

Like other artists in Fordham Westchester’s Matters of the HeART show, which celebrated its opening on June 6, it took Finsilver, a former dancer, a while to get around to putting her passion to canvas. The exhibit features the works of 37 Westchester artists over age 55, many of whom harbored a lifelong love of art but only began painting and drawing later in life. 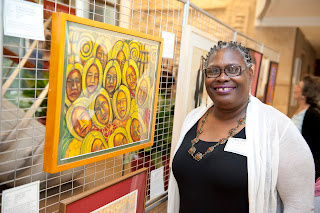 For Madge Scott, it was the stress of family illnesses and other conflicts that inspired her, in the late 1990s, to rescue a paint set her daughter had just thrown out.

“I put it aside, and when I had difficulties, I turned to the painting,” said Scott, who started by teaching herself to draw dresses and who now makes a living with her historic and folk art. In January, she received Westchester County’s Martin Luther King Jr. Humanitarian Award.

Now in its fifth year, Fordham Westchester’s Matters of the HeART provides a unique opportunity for older artists and the public to celebrate and support creative aging through the arts. It is co-sponsored by the University, the Helen Andrus Benedict Foundation, and Greenburgh Arts and Culture, which also takes the show to two other Westchester venues. 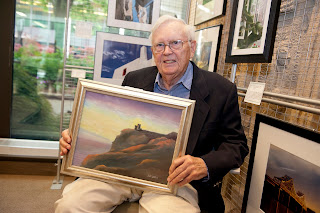 While many of the artists were first-timers in the juried show, Phil Wallace, FCRH ’54, was back for a fifth year to display his watercolors. His painting of the Cliffs of Mohr situated on the West coast of Ireland, was meant to “capture the emotion of being there.”

“It is a great form of expression,” said Wallace, who took up painting when he retired 25 years ago. “When I am painting I can’t think of anything else but what I am doing, so it takes me away from all my surroundings, I get completely absorbed. It’s a good thing.”

Another late bloomer, Peter Diafeira, 85, did his first water color when he got out of the Marines in 1946. He did his second in 1986. 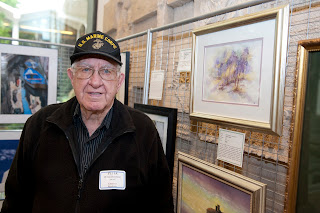 In between, he worked as a graphic and animation artist, creating the opening segments for shows like Monday Night Football. He recalled hand-lettering movie titles and doing animation which required 24 drawings for each second.

“Everything was so exact in graphics and animation. Now I am trying to get loose,” said Diafeira, who likes the “technique of using a wet piece of paper, and water colors.”

Creating art may be a solitary experience, but Paula Masterson, 73, makes it community-building and comfort-bearing activity. Masterson said she gives most of her paintings away. Her Funky Rooster, on display, was a gift to a sister-in-law going through one of life’s rough patches.

“It made her smile,” said Masterson. “We had a good laugh over it.” 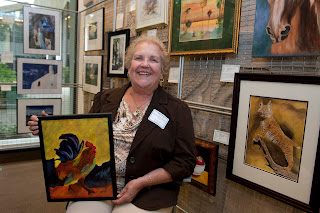 “And our diverse body of students appreciate seeing the grace of age through creative arts when they walk through the door.”

The exhibit runs through Friday, June 14. The campus is located at 400 Westchester Ave. in Harrison, N.Y.