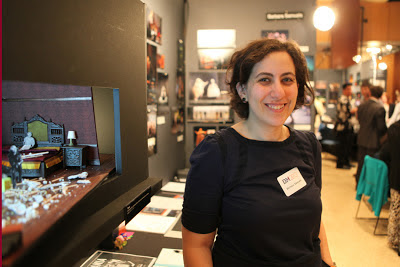 Barbara Samuels, FCLC ’08, is a graduating grad student at NYU’s Tisch School of the Arts.

Barbara Samuels’ academic journey came full circle on May 24, when she returned to  Lincoln Center’s Pope Auditorium for Design Meeting 2013, a conference that brings together MFA graduates in theater design from Yale, CalArts, and NYU. Samuels studied design and production at Fordham’s theatre program, the event’s sponsor.  She then went on to the MFA program at NYU’s Tisch School of the Arts.
“I worked at least six plays in this room, three-quarters of my time at Fordham was spent here,” she said.

Samuels said she remembered attending an earlier iteration of the event at Fordham when it was still known as the Clambake. Started by world-renowned theater designer Ming Cho Lee, the name change occurred after Lee retired and Fordham Assistant Professor Kris Stone teamed up with other students who studied under Lee at Yale. The legacy continues on the “neutral” playing field of Pope Auditorium.

“It’s a neutral space where we can be celebrated as designers and not as individual schools,” said costume designer M. Meriwether Snipes, also an NYU grad. “Ultimately, we’re all going out to the same workforce.”

“We wanted to create an environment that was more conversational and less competitive,” she said, adding that school rivalries “just aren’t healthy.”

Clearly, the professionals agree. Thursday afternoon, the low-stress environment attracted directors, designers, and other theater professionals who were not only checking out out the fresh talent, but also fitting in some low-key networking of their own.

Tony-winning scenic designer Scott Pask, who is nominated again this year forPippin, said that he got his first job out of Yale through the event. Now he comes to look for students whose work that he’d “like to champion.”

“The set-up here at Fordham is not overwhelming, and I mean that in a good way,” he said. “The flow is great, the location is great, you can move through at your own pace and spend a little time with the designers.”

The event is staffed by Fordham theater students, whose role has grown with the event over the past four years. The design and production concentration of Fordham’s theater program has also grown. Fourteen more students will be added to the track this fall, bringing the total to 39.

In addition to providing support for the grad students, the undergrads also get to rub shoulders with world class talent. Megan Lang, FCLC ’13, said that it was faculty connections like these that brought her to Fordham.

“Our professors know people in theater and they pull us up with them, and having the design meeting is just another example of how they help us meet people,” she said.