skip to main content
Return to Fordham University
You are at:Home»Arts and Culture»Theater Professor Honored as USA Fellow 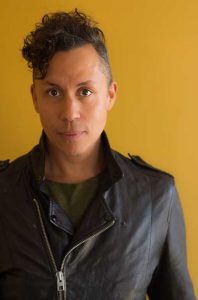 Daniel Alexander Jones, who was honored as a Doris Duke Artist last year and was included in the Yerba Buena Center for the Arts’ top 100 artists this summer, has taken home yet another award: a USA Fellowship. The award, which is accompanied by an unrestricted $50,000 grant, recognizes America’s most accomplished and innovative artists.

“I have to knock on wood, because these things are quite rare. It’s an amazing thing to have my work recognized in this way, and for it to be in such a big fashion is totally humbling,” said Jones, who heads the playwriting curriculum in Fordham’s theatre program.

Jones received news of the win just as he was coming off another artistic triumph: the staging of Duat, an Off-Broadway play that the New York Times dubbed a “sui generis performance piece.”

With his current sabbatical ending in January, Jones is returning to the Lincoln Center campus, where he’s exited to teach his favorite course, Flying Solo, and start dreaming up and researching a new project.

“I’m really grateful to Fordham and my department in particular for supporting me as a working artist. It’s a difficult thing to balance teaching and have a career, but they understand how important it is to have working artists in our classrooms,” he said.

The USA Fellowship, which was created in 2006 by the Ford, Rockefeller, Rasmuson, and Prudential Foundations, honors disciplines as varied as architecture, folk art, and music, as well as theater. For Jones, the fact that the award is not tied to an individual project is particularly exciting, as it allows him to work on projects that don’t need to result in an immediate outcome.

He’ll need that time too, as the 2016 presidential election made it clear that there’s a greater need than ever for art that focuses on communication, building community, and inviting people to cross boundaries that appear to separate us, he said. This is the essence of Jones’ alter ego “Jomama Jones.”

For his next project, Jones plans to reach people who have never set foot inside a theater by putting on performances in nontraditional spaces. He said he’s guided by the truism, “Love and fear cannot exist in the same space at the same time.”

Fear of “the other” has been dominant these past 18 months, and whether that hate has manifested itself in racism, homophobia or xenophobia, Jones said he is hopeful that theater has a place in fighting it.

“One of the things that I think live art—and theater in particular—can do is to help us see one another, and to see ourselves,” he said.

“When you can really see somebody in all their complexity, and you feel seen in all of your complexity, it’s a little bit harder to move on feelings of fear.”