skip to main content
Return to Fordham University
You are at:Home»Arts and Culture»The Man Behind the Blog: Humans of New York Founder Visits Fordham

Everyone has a story. It’s Humans of New York founder Brandon Stanton’s job to share them with the world.

Stanton offered up his own story as well as some sound advice on achieving success at the annual Spring Weekend lecture on April 23, hosted by the Campus Activities Board (CAB).

Humans of New York, or HONY as it is more popularly known, is a photo blog started in 2010 that features portraits and stories from the people of New York City. The blog, which has picked up an enormous following across several social media platforms, also spawned a New York Times bestselling book of the same name in 2013.

“When deciding who to bring to campus, we wanted someone who would connect with the students and inspire them at the same time. Since [members of the Fordham community]are humans of New York ourselves, we thought that Brandon Stanton would be a perfect fit,” said Fordham College at Rose Hill sophomore Emily Oliver.

A whopping 1,400 students flooded Rose Hill’s Lombardi Fieldhouse for a chance to hear the photo blog founder speak. Due to the incredible amount of interest the lecture garnered, CAB was forced to move their location from the McGinley Center Ballroom to the Fieldhouse in order to accommodate more people.

One of those people was Gabelli School freshman Sophia Waldron, who began waiting in line at 3 p.m. Situated in the front row of the audience, Waldron clutched a copy of Stanton’s Humans of New York book while waiting for the lecture to begin.

“The stories are so inspirational. Sometimes, when I walk around New York City, I think ‘What would I say if HONY came up to me right now?’”

And it’s the story that’s most important to Stanton.

THE EVOLUTION OF HONY

After warming up the audience with a few quips about his most recent appearance in Dubai, Stanton delved into the evolution of HONY. He said he lost his job as a bond trader in Chicago and decided to spend the next stage of his life making the minimum amount of money possible while still controlling his own time. He did what interested him the most, which was photography, and developed his skills through trial and error.

He moved to New York, where his plan was to take 10,000 photos of people and plot them on a map of the city. After meeting a woman who said something especially poignant to him during a photo shoot, his idea of making the story the focal point emerged.

THE KEY TO SUCCESS

Stanton walked his audience through a typical interview session and demonstrated how he gets his subjects to reveal such intimate stories about their lives. His general questions become more specific as the participant’s answers become more personal. Stanton invited a student from the audience, Fordham College at Rose Hill freshman Amanda Reed, to demonstrate.

“I think I stand in my own way,” she responded.

After some more prodding, she revealed missed opportunities with people she was romantically interested in, and it’s those moments of true vulnerability that Stanton looks for.

As a piece of advice, Stanton told the crowd that it’s more important to be different than good.

“Social media has become a paradox”, he said. “It’s easier than ever to get famous on social media, but harder to grab people’s attention.”

Therefore, it’s necessary to differentiate yourself from the pack and hard work because, according to Stanton, it’s the only thing you can control.

As for what Stanton thinks makes HONY different?

“It tells a person’s story in a way that’s not curated for perfection. It demonstrates people’s weaknesses and vulnerabilities.” 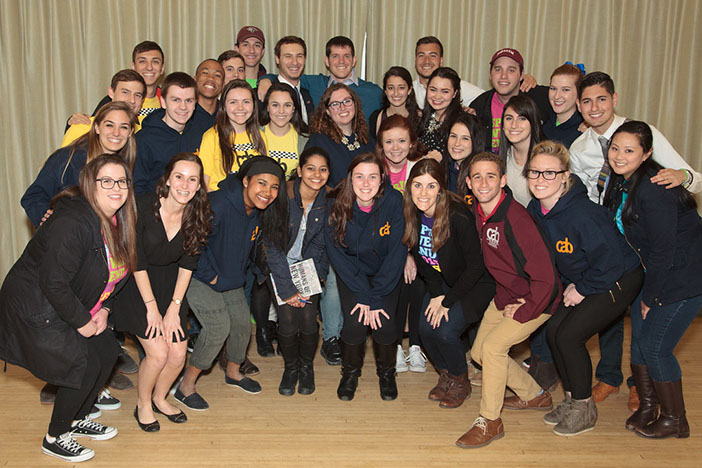 Brandon Stanton with members of CAB’s executive board