skip to main content
Return to Fordham University
You are at:Home»Arts and Culture»The High Line: How a Symbol of Blight Became an International Sensation 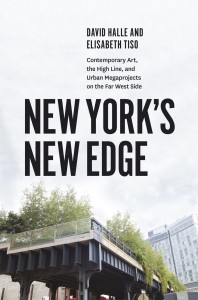 New York City’s High Line may only be 30 feet high and less than a mile and a half long, but the elevated linear park on the West side of lower Manhattan has been a magnet for visitors from the moment it opened in 2009.

Although it’s clear in retrospect that it was a good idea to build a park atop an abandoned train line, it was far from a fait accompli when it was proposed in 1999 by a group of neighborhood activists.

Elisabeth Tiso, an adjunct professor of art history at Fordham, and David Halle, Ph.D., professor of sociology at the University of California, Los Angeles, detail the history of the park in a new book, New York’s New Edge: Contemporary Art, the High Line, and Urban Megaprojects on the Far West Side (University of Chicago Press, 2014).

Tiso said the book started out as an examination of the art scene in Chelsea—one of the four neighborhoods the old train line crossed (along with Hell’s Kitchen, the West Village, and the Meatpacking District.)

A longtime resident of the Meatpacking District, Tiso said she and Halle were intrigued by the way the artist’s scene had leapfrogged from SoHo, a neighborhood that was settled by artists in the 1970s, to other neighborhoods. Led by groups such as the Dia Art Foundation, Chelsea was transformed in the 1980s and 1990s into an art-friendly enclave by gallery owners. This would prove to be an important part of the High Line’s genesis, said Tiso.

“We branched off into the High Line because the promoters of the High Line seemed to define themselves as part of the gallery district,” she said. “That’s how they were getting benefactors on board to donate money, because contemporary art is a very popular field. Everyone wants to jump onto the contemporary art bandwagon. Along with the High Line, it has become a very hot area.”

The High Line is an ideal case study for anyone interested in learning the ins and outs of parks creation, historic preservation, the promotion of art, and how all three can be successfully harnessed in the name of urban renewal. This was something that the Bloomberg administration appreciated in ways that his predecessors had not, she said. The Bloomberg administration deserves credit for rezoning the area from manufacturing to residential and for striking deals with owners of property under the rail line.

“Initially all these big developers like Related and Brookfield were actually against the High Line. They all wanted the old train line torn down. And then it became a success. And now they’re promoting and selling new condos because of the High Line,” she said.

In New York, fans of adaptive reuse have taken inspiration from the High Line to also pitch the creation of a “Low Line” inside a former trolley terminal on the Lower East Side, and Queensway, on the site of an abandoned rail line in Southern Queens.

Tiso cautioned against assumptions that the success of the High Line can be easily replicated, however. Its proximity to the contemporary art scene enabled promoters to tap into private donations for a full third of the park’s cost, and just as importantly, the City of New York funded its portion before the financial crash of 2008, when funds were more plentiful than they are now.

“The High Line has become more than just a park. They do art shows, they commission installations and sculptures on a temporary basis, they have dances and other performances up there; they even now organize gallery exhibitions,” she said.

“They’re really becoming a behemoth of a cultural institution.”