skip to main content
Return to Fordham University
You are at:Home»Arts and Culture»“The Cardinal and Colbert” Brings the Serious Business of Being Funny to Rose Hill 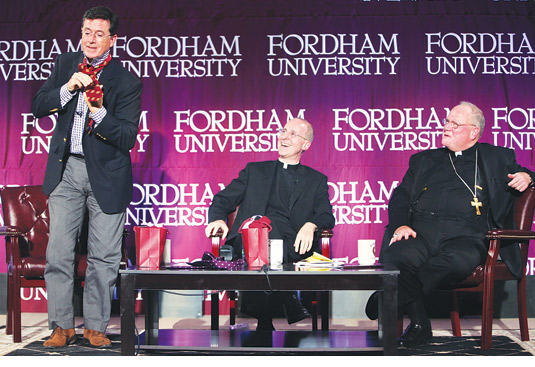 Masters of Wit and Witness
Stephen Colbert, left, dons a Fordham tie after receiving it as a gift from
Joseph M. McShane, S.J., president of Fordham. Colbert appeared with
Timothy Cardinal Dolan, right, and James Martin, S.J., center, in “The Cardinal
and Colbert: Humor, Joy, and the Spiritual Life” on Sept. 14. 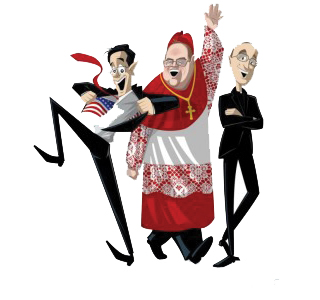 In an evening that was equal parts pep rally, comedy show and religious revival, “The Cardinal and Colbert: Humor, Joy and the Spiritual Life” brought together Timothy Cardinal Dolan, archbishop of New York, and comedian Stephen Colbert at the Rose Hill Gymnasium on Sept. 14.

Students camped out on line the night before to get the coveted blue wristband that assured them one of the gym’s 3,000 seats.

“We really didn’t know what to expect from the conversation; it turned out to be very funny, but also serious,” she said. 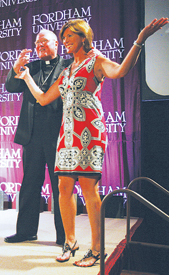 “We knew that Stephen Colbert knows a lot about Catholicism, but tonight he revealed a side of him that was deep and very thoughtful.”

The initial idea for the program came from two assistant theology professors, Charles Camosy, Ph.D., and Michael Peppard, Ph.D., who envisioned the event as an example of the New Evangelization.

Describing herself as “religious,” Sara McDonough, a Fordham College at Lincoln Center sophomore who was one of the attendees, said that even though she had never seen Colbert’s show, she wondered whether his reputed humor would be dulled in a conversation about religion.

“But I was entertained throughout the whole event. It was really funny—I loved it.”
Her friend Natalie DeVaughn, a sophomore international studies major at Lincoln Center, agreed.

“I think it’s important that people know that religion isn’t all about reprimanding and guilt, that it’s supposed to give you happiness,” she said. “I think this was definitely about happiness.” (To see the animated introduction to the program by Fordham student Tim Luecke, click here🙂 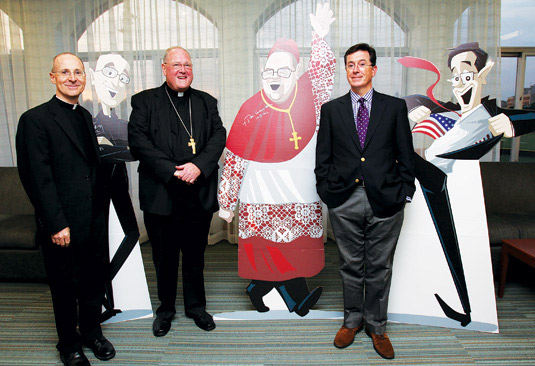