skip to main content
Return to Fordham University
You are at:Home»Arts and Culture»Tastemaker Rita Houston Celebrates 25 Years at WFUV
Photo by Laura Fedele
As Rita Houston signed on to her 25th anniversary broadcast at WFUV on April 5, she was greeted in the studio by colleagues who presented her with a silver record plaque, a cake frosted with her smiling caricature, and a champagne toast.

“Thank you for all your energy, your passion, your vision,” said station manager Chuck Singleton, who hired her in 1994 to host FUV’s midday show. “Thanks for piloting FUV’s musical direction for two-and-a-half decades.”

As WFUV’s program director since 2012, Houston has developed a national reputation as a tastemaker for new music and a champion for emerging artists—both on the air and in live music settings. Along with her administrative duties, Houston still hosts her Friday night show, The Whole Wide World, where the anniversary celebration was heard live. 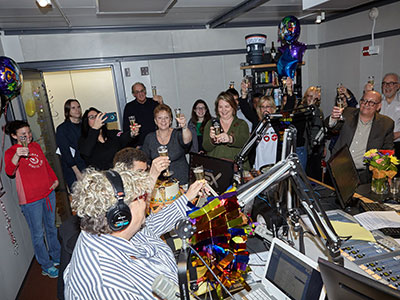 With her co-workers celebrating around her, Houston proceeded to play her signature eclectic blend of tunes. The Friday evening program, which airs from 6 to 9 p.m., welcomes listeners to the weekend with music she says will get you dancing in the kitchen. It showcases artists from the ’60s and ’70s, like Aretha Franklin and Marvin Gaye, as well as singer-songwriters and indie bands from today’s scene, like Andrew Bird and the Mavericks.

Houston knows fans have come to depend on her to introduce them to new music they’ll love.

“When listeners hear something new at WFUV, there’s an inherent trust it has been selected with their general taste in mind,” Houston said. “You develop trust with the audience, with artists, and with record labels. You become a trusted source.” 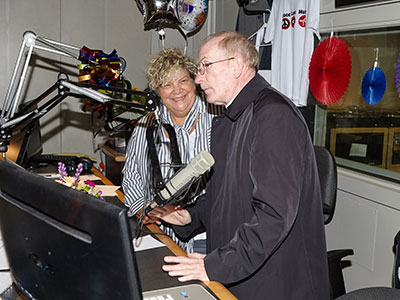 The music that Friday was interspersed with recorded messages from artists such as famed rhythm and blues singer Mavis Staples and the Indigo Girls.

“I love you girl,” cooed Staples. “You keep on keeping on.”

There were also appeals for donations in the station’s spring fund drive, with one of Houston’s fans pledging a matching gift of $25,000 in honor of her anniversary.

Dressed in a flowing white- and blue-striped blouse, with her mop of curly blond hair falling on her forehead, Houston went live after spending the afternoon preparing for an upcoming interview with singer-songwriter Patty Griffin. Her voice that night was vintage Rita: upbeat, conversational, informed, and at times, personal.

Upon reflection, Houston said she was a bit surprised it had been so long since she began working at WFUV on April 5, 1994. But, she said, for all the changes in the radio and music industries, the essential element of her work remains the same. 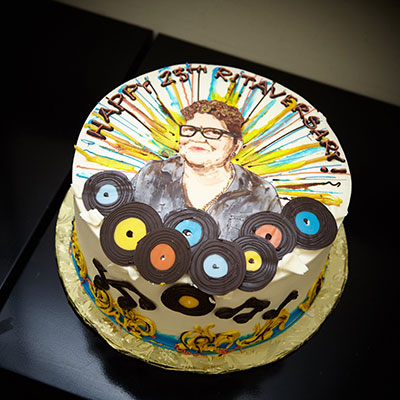 “I have the same passion for the work that I had 25 years ago,” she told listeners. “There’s no coasting. There’s always new stuff to learn. And like any creative work, there are always new layers to peel.”

Houston has held many roles over a quarter-century at WFUV, Fordham’s public media station. After starting as the station’s midday host, she became FUV’s music director, and since 2012, has served as the station’s program director. Her current post includes involvement in radio programming and content for WFUV’s website, as well as fundraising, membership programs, and WFUV’s live concert series.  She also produces and sometimes emcees live shows for WFUV’s Marquee members—those who contribute $125 or more a month—at small venues like Rockwood Music Hall and City Winery in lower Manhattan. Performers have included Lucinda Williams, Rosanne Cash, Steve Earle, and Richard Thompson.

The digital revolution in the music industry has broadened Houston’s work—and changed how music lovers hear the songs they grow to love. Many of WFUV’s 400,000 weekly listeners access the station, as they always have, on the radio dial at 90.7 FM. Others also stream WFUV live on their desktop computers, tablets, or mobile phones. Others, still, listen to archived shows online at WFUV.org and attend WFUV events in the New York metropolitan area.

“We have dreams at WFUV, and we work to make them happen,” she said.  “But the competition has never been greater, with Spotify and other streaming services. When I started here, if you wanted to hear Joni Mitchell or Dar Williams, we were the only place to hear them. It’s a crowded field today.” 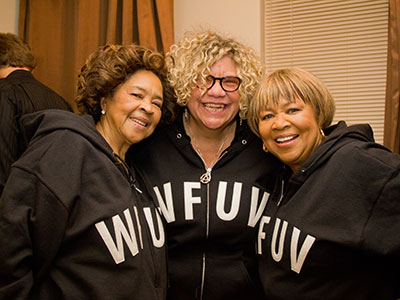 Houston’s national reputation has been developed partly through the station’s relationship with National Public Radio. WFUV is a member of the NPR Music partnership, a group of stations that collaborate with NPR on content. Houston has anchored NPR Music’s coverage of the Newport Folk Festival for several years, providing input into its “best music of the year” lists, appearing on NPR’s Morning Edition, and contributing to a project that spotlights women in music.

“Rita is an irrepressible force,” said Anya Grundman, NPR’s senior vice president of programming and audience development. “She has a great relationship with artists that shines through every time you hear her.”

Her friendships with recording executives like indie record label executive Daniel Glass, founder/president of Glassnote Music,  also keep her informed about new talent on the rise.

“She is a deeply soulful person, the music she plays has soul, and the artists she discovers, nurtures, and champions all have soul, regardless of the genre of music they fit into,” he said. “We are all enriched by Rita Houston’s ability to escape to a blissful aural theater.”

Houston, a Westchester native, moved to Nyack, New York, in 2002 to a home she shares with her wife, WFUV new media director Laura Fedele, and her Boston terriers Banjo and Emmy Lou, rescues from Tennessee. 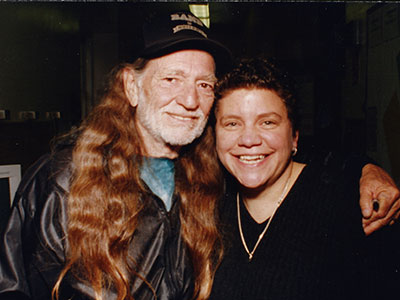 Willie Nelson with Houston at WFUV in 1998

The music Houston enjoys at home—like the music she plays on the air—spans more than a half-century – from Frank Sinatra and the Grateful Dead to Lucinda Williams and the Hot Sardines. When she goes to what she calls her personal “music church,” she listens to ’60s rocker Van Morrison, who Houston heard play in Chicago in April. And though she didn’t listen to the Grateful Dead during that band’s heyday in the 1970s, when she was deep into disco, punk, and new wave, she has since gained an enduring appreciation for the group.

“The Dead was so rooted into American roots music, and they brought it somewhere nobody else had taken it,” she said.

As much passion as she has for classic artists like those, Houston’s love of talented emerging musicians has been a large part of her success—and that of the station. In addition to playing their tunes, she often engages these artists in live studio interviews for the WFUV audience. 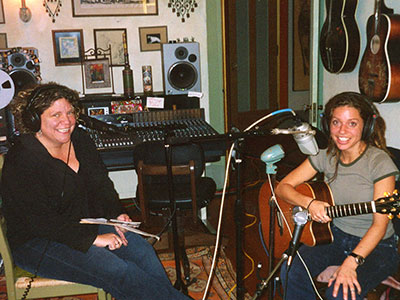 Houston with Ani DiFranco at the singer’s home in Buffalo, New York, in 2004

“Rita is hugely respected for her ears, and her ability to discover rising talent,” said Singleton. “She has smart, informed conversations with them about their work. She champions them and maintains a relationship with them throughout their careers.”

“Fundamentally, her importance is rooted in the fact that she cares so much about her job and the team around her and the music she is passionate about,” he said. “It’s pure and untainted, and by no means naïve. Quite the opposite. She has the rare quality of a wealth of experience without being at all jaded. Rita is a real legend, and we feel, as many artists and non-musicians do, grateful to know her. We’ve deeply appreciated her support over the years.”

That passion for the music is one of the things that kept Houston’s spirits up during her recovery from ovarian cancer in 2014, after surgery and several months of chemotherapy. She remains in treatment at Memorial Sloan Kettering in an immunotherapy clinical trial, which has kept her healthy almost five years after her initial diagnosis.

“It has been quite a roller coaster,” she said. “Getting healthy is a full-time job in itself. I’m still in treatment, have a job I love, and surround myself with beauty and the healing power of music to keep me going.”