skip to main content
Return to Fordham University
You are at:Home»Arts and Culture»Students Work with Bronxites to Paint Community Mural
Fordham student Isabella Iazzetta works on the mural on April 23.
Fordham students and Bronx residents are working together to create an Earth Day mural at an after-school center for underserved youth a block away from the Rose Hill campus.

“We’re working on having our students understand that what goes on outside is community. It’s love. It’s history,” said Lisa Preti, an assistant director in student financial services at Fordham and the mural project manager. “We’re having people actually immerse themselves in the community, as opposed to just learning about it in the classroom.” 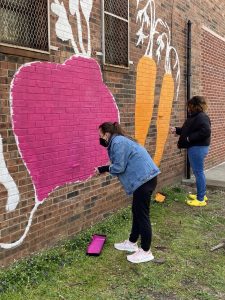 The initiative was spearheaded by Fordham Bronx Advocates, a grassroots group of 10 to 15 Fordham community members and Bronx residents whose goal is to create a stronger partnership between Fordham and its neighbors. The mural is the first major project for the group, which was founded by Preti and her colleague Mark Naison, Ph.D., professor of history and African and African American studies, this past fall semester. The large scale artwork is being painted on a side wall of the John E. Grimm III Clubhouse, a center that offers academic and recreational activities for young people in the community, said Preti.

“The first building I saw right across the street from Fordham was the clubhouse on 189th Street and Lorillard Place. I went in and asked them if they were interested in creating a mural on site, and they said, ‘Yes, absolutely—we’ve been looking to do something like that for a long time,’” said Preti. “It’s really just taken off from there.”

The mural was designed by Lovie Pignata, a Bronx artist and community activist, and funded by several Fordham groups and departments including the Bronx African American History Project, the Office of the Chief Diversity Officer, the Fordham College Dean’s Office, and the Center for Community Engaged Learning. Project organizers also received free paint, rollers, and supplies from the nearby New Palace Paint & Home Center on 180th Street, said Preti.

“It was amazing to see the community so quickly say, yes, we’ll help,” said Preti, a Bronx native whose parents still reside in the borough. “It started as a small grassroots movement, and we got lucky along the way.”

In mid-April, the artist behind the mural, Pignata, met with Fordham student volunteers and the clubhouse’s teenagers and staff to transform a plain brick wall into a garden mural bursting with colorful fruits, vegetables, and flowers. The mural includes several symbols, including root vegetables, which represent hidden potential, said Pignata. 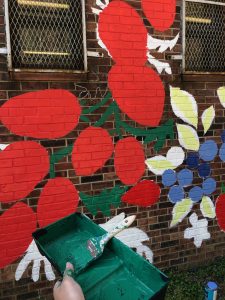 A closeup of the mural. Photo courtesy of Isabella Iazzetta

After the mural is completed in May, the clubhouse will plant an actual community garden in front of the mural to help combat local food insecurity. Three planter boxes have been donated by the Northeast Bronx Community Farmers Market Project, which will also provide seedlings, said Pignata.

“The theme of the mural is ‘growing together,’” Pignata said. “I like to make what I call community art, which is more hands-on and has more interaction with the people who will live near it [than public art]. I hope everybody involved in the mural is proud of it and feels like they’re a part of it.”

Isabella Iazzetta, a junior at Fordham College at Rose Hill who has participated in two painting sessions, said her volunteer experience has introduced her to more members of the Bronx community, including elementary school students who walk by and marvel at the mural. This summer, Iazzetta will be able to walk past the finished mural every day.

“My roommates and I are actually moving off campus on that same block,” said Iazzetta, who studies humanitarian studies and theology religious studies at Fordham. “It’ll be so cool to look at and know that I had a tiny role in helping this all come to life.”