skip to main content
Return to Fordham University
You are at:Home»Arts and Culture»Students Share Personal Writing at Inaugural Story Circle
Sarah Gambito and students at the Story Circle. Photos courtesy of Sarah Gambito
Students and a new faculty member recently shared stories of personal loss and hardship in a “Story Circle”—a new way of sharing student writing at Fordham.

For the past five years, Fordham’s creative writing program has hosted the Golden Gloves Literary Competition, an annual event where creative writing classes from the Rose Hill and Lincoln Center campuses present their literary pieces and compete for prizes. But this school year, with a new name, the event struck a different tone.

“We wanted creative writing to act as an opportunity for community building as opposed to competition … We wanted all our classes’ stories to be celebrated in equal measure,” Sarah Gambito, an associate professor of English and director of the creative writing program at Fordham, explained in an email.

On Dec. 6, nearly 150 students and faculty members gathered in Lowenstein’s 12th-floor lounge to retell the stories they had written this past semester. 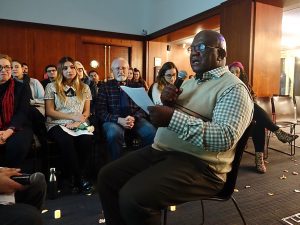 The event began with a story from Fordham’s second Writer at Risk in Residence: Felix Kaputu, Ph.D., a scholar from the Democratic Republic of Congo who arrived at Fordham this past October through a collaboration that gives writers a “free, safe place to live, work, and write without the threat of violence from their home countries” for two years, according to the program’s description.

Kaputu spoke about life in his native Congo, from the political environment to how his father and uncle shaped his identity as a storyteller. In 2006, Kaputu was falsely accused of participating in anti-government activities and jailed in solitary confinement.

Below is an excerpt from Kaputu’s piece shared at the Story Circle:

“My father, who was working as the catechist for the Catholic Mission, had an extraordinary talent as a storyteller of a particular kind. However, he would not use his talent for tales, legends, epics, and other oral narratives that had well-known narrators. They produced their stories in royal courts with a big group of musicians and drumbeaters. My father had the talent to make, keep the suspense, and talk about his personal life, and encounters. His stories included running from both the local and neighboring countries’ police. A famous story was about fighting a lion from a hut where he was hiding from the police. Another narrative was about moving from Congo to neighboring countries using a bicycle to celebrate life with the locals sharing the same culture. However, he would run back to the Congo whenever the locals would find him too much seductive of their women. He had more stories of that kind.  Then, my uncle, a professional hunter, had a significant influence on me. I lived with him a couple of times during school vacations. He shared with me traditional knowledge and curing diseases with medicinal plants. He taught me how to interview community leaders and wander in the forest at night without being lost.

That background has made me strong over the years. I learned to resist when condemned for prison without reason, and I easily travel around the world as a scholar and writer at risk without remorse.”

This semester, Kaputu taught a creative writing class at Fordham.

“It means a lot to me,” Kaputu said. “One of the most important things I like in my life …  is [teaching]. There is nothing else in the world, I think, I like [more than]  being in class with students … They learn from me, I learn from them.”

Eight students also presented work from their creative writing classes. They took turns and sat in pairs, facing each other. Surrounding them were their classmates and mentors, along with flower petals and yellow candles on the carpeted floor. For more than an hour, students retold personal experiences from their lives. After each student spoke, the next speaker gave them a wish relating to their story, like “I hope that you are always surrounded by the ones that you love,” said Gambito. 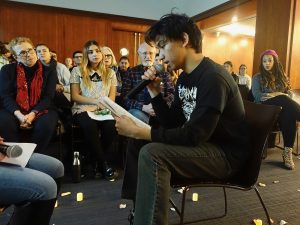 Among the student speakers was Patrick Raneses, a senior English major and theology/creative writing minor at Fordham College at Rose Hill, who read a piece he wrote about his grandfather for Luminous Details, a graduate-level creative writing course.

Below is an excerpt from Raneses’s piece, “Some memories”:

“I remember when I was back home one summer and you and I were sitting on the ugly orange couches in my living room. Mom wanted you to visit, because you were getting stupid old. We were sitting there, silent. You were penning a letter while I was flicking through something on my phone.

Unprompted, you turned to me and started telling me this story about when you were in the Philippine Army during World War II, you were a cook and you weren’t much younger than I was. And when you were carrying a tray of food from one barrack to another, a Japanese soldier rushed you and buried his bayonet into your gut.

You lifted your shirt and started laughing: I stared at the striated patterns of flesh that was your marbled torso and I tried looking for the scar. I think I saw it there in the folds. I smiled, saying that was amazing, because I thought it was at the time, even though that’s a strange way to describe a thing like that. You giggled, too, and stared at me with your giggling eyes.

Then you turned back to write your letter. About ten minutes later, you started telling me when you were in the Philippine Army during World War II, you weren’t much younger than I, a man gutted you. I told you that was amazing, again. You looked at me, again, with your giggling eyes, and you told me, dementia is like hell.”

Raneses said he realized he was a writer in the first creative writing class he took at Fordham, nearly a year ago.

“I really identity myself as a writer, in the same way that I am an Asian American,” Raneses said. “I am a writer because I have to write. It’s like a release valve. It’s therapeutic in a lot of ways … It forces me to challenge myself, whether that means confronting certain truths or hard things.”

Camille Hermida-Fuentes, a junior English major at Fordham College at Lincoln Center, wrote about her grandmother Alicia—the “unluckiest” person she said she knows.

Below is an excerpt from Hermida-Fuentes’ piece, “Carcassonne”:

“Alicia had really, really bad luck. In 1985, she was at an art museum in D.C., with her son and daughter. Her son said, “Alicia, look at this painting”, so she turned around and then she was collapsing, and then she was waking up in a hospital and they were telling her it was cancer. Multiple myeloma. The kind that clings to your bone marrow for its life. The kind that doesn’t go away. And it didn’t. For 27 years, it didn’t go away. Doctors said it was a miracle but there was nothing miraculous about her life, about how she was always collapsing. Once, she tripped over her own feet on her way to the bathroom in the middle of the night and caught pneumonia because of the angle her broken shoulder bones forced her to stay in, pushed liquid into her lungs.”

For Hermida-Fuentes, a self-described “shy” person, storytelling helps her to convey her emotions.

“I truly love telling stories … I feel like when I write, I’m finally getting to say what I want to say,” she said. “And there’s something really cool about being able to create your own kind of world when you write.”

She said the Story Circle—her first-ever public reading of work—was also an opportunity for healing.

“This is a story I’ve been having a hard time telling. There’s a lot of complicated feelings and guilt,” Hermida-Fuentes said. “It was very healing to have everyone that I know from class there to support me.”