skip to main content
Return to Fordham University
You are at:Home»Arts and Culture»Students Bring History to Life Through Podcast
Christine Caccipuoti, above, working on a recent episode of Footnoting History.
Sometimes, all you need is a good story about rotting teeth to get people’s attention.

When the Canadian Broadcasting Company included Fordham graduate student (she has since graduated) Christine Caccipuoti’s episode of Footnoting History on its list of 10 history podcasts you need to hear, the episode was downloaded 8,000 times. It shattered the record of any other podcast on the Footnoting History site.

The episode, “The Royal Teeth of Louis XIV,” also put Footnoting History on the radar of lovers of history everywhere. Since February 2013, the biweekly podcast series has explored overlooked, unknown, and exciting stories that a team of Fordham history students pluck from the footnotes of history. 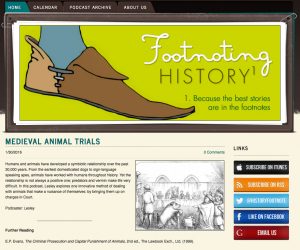 Doctoral candidate Elizabeth Keohane-Burbridge said she started the series as a sort of “career plan B,” in case the coveted job of university professor eludes her upon graduation.

“If I can’t be a history teacher, how can I still have history in my life while doing something else? I thought, podcast. I listen to history podcasts, and the one I wanted to join wasn’t hiring, so I figured I could do it myself.”

The goal of the series, which currently has 124 episodes ranging from everything from dog history and film to Medieval conspiracy theories, revolutionary France, and running in history, has always been to walk the line between academic and educational. Seven students contribute to it, and the only condition for a topic to be covered is that it must be based in the past.

“We see ourselves as everyone’s quirky friend who always has a historical anecdote/reference whenever out socializing,” Keohane-Burbridge said.

Many of the episodes have been adapted from lessons or papers that the students, who are all working on either master’s or doctoral degrees, have presented. Keohane-Burbridge said that part of the success of the site can be attributed to the fact that her team has learned how not to sound like teachers.

“Even though our podcast audience may believe that we know more, we don’t want them to feel like we’re putting them down, as if we’re over-explaining or treating them like small children.”

Another tip is one Keohane-Burbridge picked up from a professional broadcaster: Smile when you’re saying something exciting, because even though you’ll feel silly, that smile will convey itself through your voice.

“I think [now]we’ve really hit a stride where we’ve really hit that conversational tone,” she said. But for a long time “it was a work in progress, and we really had to make a conscious effort to do that.”

She said the episode she most enjoyed creating is one about lesbians in British mystery novels from the 1940s and 50s. She was inspired by historian and literary theorist Edward Said’s idea that you can understand cultural norms of the day by reading literature because anything out of the norm would have stood out and upset readers. Thus, she said, the works of Dorothy Sayers, Agatha Christie, Dame Ngaio Marsh, and Patricia Wentworth reveal how lesbians lived in and were viewed by wider society, from London to the countryside.

“[There were] manly women who lived with another woman, and nobody called them gay or lesbian. But it’s pretty obvious that’s what there were and [that]they were everywhere. They inhabit so many of these books,” she said.

Keohane-Burbridge said she hopes to continue the site even after she finishes her doctoral degree. Her goal is to crack the top 10 list of history podcasts. Few of them, including the extremely popular “Stuff You Missed in History Class,” are run by academic historians–something that Keohane-Burbridge hopes to change.

“They’re still very good and very entertaining, and people obviously like them,” she said. “But I think academic historians should be able to be just as entertaining.

“We should be able to tell that story.”