skip to main content
Return to Fordham University
You are at:Home»Arts and Culture»Student Play Honored in Theater Festival 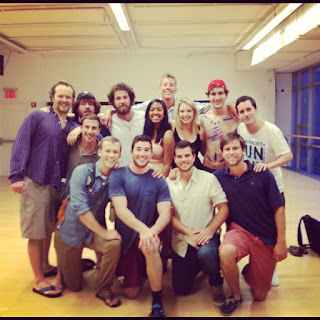 The cast of Cowboys Don’t Sing

The play, which was written by Dennis Flynn, FCRH ’12, Johnny Kelley, FCRH ’13 and TJ Alcala, FCRH ’13, first debuted at the Collins Auditorium’s Black Box Theater at Rose Hill in February.

It was one of 24 plays selected for the festival, which ran from June 13 to June 17 at the Bessie Schonberg Theatre in Chelsea. After a watching a segment of the plays in the festival, members of the audience voted on the submissions. At the end of the festival, Cowboys Don’t Sing took home several awards:

For the series competition, (five shows):

For the entire festival:

Flynn said the show, a loving parody of the standard tropes of the Westerns and musicals, had to be whittled from and hour and 45 minutes down to 15 minutes, and had to be performed without Alcala, who is in Africa.

“It was a little weird to do it with a slightly different cast, but we’re all such good friends that it just came together,” he said. “It was fun though. I think it was received so well because we decided to go as big and fast as possible.”