skip to main content
Return to Fordham University
You are at:Home»Arts and Culture»Sperber Award Recognizes Biography of WW II Cartoonist 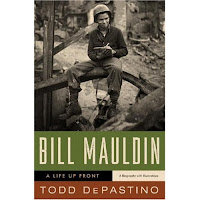 The book traces the life and career of the Pulitzer Prize-winning cartoonist, famous for his World War II cartoons featuring the archetypal soldiers “Willie” and “Joe.” Their experiences of infantry life on the field were followed by millions of Americans during the war. Mauldin himself served in the 45th Infantry Division, drawing six cartoons a week for Stars and Stripes while on his tour of duty. At age 23, he was awarded the Pulitzer in 1945 for his collection from the front lines, Up Front, and he received the award again in 1959 for his editorial cartoons.

The Sperber award is given annually by Fordham to an author of a biography or autobiography of a journalist or other media figure. The award was established by a gift from Liselotte Sperber, in memory of her daughter Ann M. Sperber, who wrote the Pulitzer Prize-nominated biography of Edward R. Murrow, Murrow: His Life and Times (Fordham University Press, 1998).

Al Auster, Ph.D., associate professor of media and communications and one of six judges, called DePastino’s book “a superb biography and welcome addition to the literature of how political cartooning has developed in the United States.”

DePastino will receive the award on Nov. 23 at 6:30 p.m. in the 12th Floor Lounge of Lowenstein center, Lincoln Center campus.