skip to main content
Return to Fordham University
You are at:Home»Arts and Culture»Sperber Award Honors Legendary Editor
Maria Tucci, center, accepts the 2017 Sperber Prize on behalf of her husband Robert Gottlieb, from Fordham’s Beth Knobel, left, and Brian Rose, right
Robert Gottlieb, whose editing talents helped breathe life into some of the most celebrated works of fiction and nonfiction writing of the past 40 years, was honored on Nov. 15 with the 2017 Ann M. Sperber Prize.

The award, which was presented in a ceremony at the Lincoln Center campus, was given for Gottlieb’s memoir, Avid Reader: A Life (Farrar, Straus and Giroux, 2016). It was accepted by Gottlieb’s wife, Maria Tucci. During his considerable career, Gottlieb served as editor-in-chief of Simon & Schuster, Alfred A. Knopf, and The New Yorker. Considered one of the greatest editors of the mid-to-late 20th century, he worked with the era’s leading authors—John Cheever, Salman Rushdie, Doris Lessing, Toni Morrison, Janet Malcolm, and Robert Caro, to name a few.

“I think in the academic world, you’ll find many of us who identify completely with Robert Gottlieb when he writes ‘From the start, words were more real to me than real life, and certainly more interesting,’” he said.

“It was fascinating for me to see how editors work with authors to, as he put it, ‘Edge a book closer to its platonic self.’ I felt like I was peeking behind a curtain and getting a glimpse of this mysterious process.” 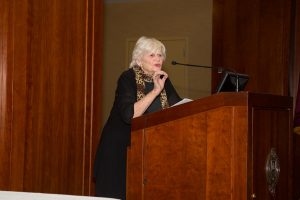 Patricia Bosworth called Gottlieb “the greatest editor in the world.”

Patricia Bosworth, a contributing editor for Vanity Fair and a member of the Sperber Prize jury, hailed Avid Reader as a “buoyant memoir of a remarkable career,” and spoke fondly of her experience working with Gottleib on Diane Arbus: A Biography (Knopf, 1984).

She recalled that although she had earned the trust of Arbus’ brother Howard Nermorov, Arbus’ estate refused to work with her or let her reproduce the late artist’s photography.

[Gottleib] said, ‘It doesn’t matter. You’re going to write about the photographs, describe them, find out how she took the pictures. Photographs will not matter,’” she said.

“Once he said that to me, it gave me confidence. I was really worried about it before.”

He taught her that work is more fun than fun, she said.

“Digging deep into something can be one of the most exciting things a writer and editors can do—discovering collecting, shaping. Bob said in his book, that ‘Work is my natural state of being.’ That’s what I learned from him, so I’m forever grateful,” she said.

In remarks delivered on his behalf by Tucci, Gottleib joked that he assumed that, having edited biographies of George Balanchine, Charles Dickens, and Sarah Bernhardt, tackling a book about himself would earn him ridicule for engaging in an “act of nervy self-indulgence.” He said he was thrilled that the prize was being given for a book that is really about books.

“I don’t know which is more gratifying: helping a writer make his or her book even better than it already is, or watching your enthusiasm for a writer or a book spread out into the world at large. And they’ve been paying me to do these things for 62 years now!” he said.

“I’ve always believed that editors should do their work invisibly, without attention being called to them. And yet I can’t pretend I’m indifferent to seeing our work honored, so I’m happy to accept this tribute not in my name only, but in the name of my whole club.”

The Sperber Prize was established by Liselotte Sperber to honor the memory of her daughter Ann, who wrote the definitive biography of Edward R. Murrow, Murrow: His Life and Times (Freundlich, 1986). It is administered by Fordham’s Department of Communication and Media Studies.