skip to main content
Return to Fordham University
You are at:Home»Arts and Culture»Spanish Music and Hispanic Heritage
Ricardo Llorca, left, and Rafael Lamas explore Spanish identity through music.
According to Rafael Lamas, PhD, an associate professor of modern languages and literatures, the impression of Spain lodged in popular imagination—of bullfights and flamenco—is one fostered by foreigners.

Lamas, a Spaniard, expresses Spanish culture through two facets: one as a professor of literature, and the other as a musical conductor. Last year he fused the two strains together in a book titled Ecsuchar e Interpretar (Alianza, 2014), translated as Listening and Interpreting.

This Saturday, Oct. 24 at 7 p.m. at Jazz at Lincoln Center, in recognition of Hispanic Heritage month, Lamas will further explore the subject through three musical selections.

“Foreigners, such as Washington Irving, created an exotic image of the country in the 19th century,” said Lamas, noting that Spain replaced Italy as the go-to destination for 19th century tourists seeking exoticism.

“But by the 20th century, the Spaniards had created their own interpretation,” he said.

The three selections will mirror the book’s central theme, beginning with “Night Music of Madrid,” written in 1780 by Luigi Boccherini, an Italian who went to Spain and incorporated Spanish motifs into his music.

“Boccherini creates an image of Spain as an outsider, which contributed in the crafting of ‘Spanish music’,” he said. 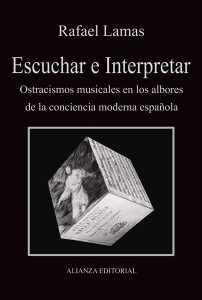 Next on the program is Catalan composer Roberto Gerhard’s “Concerto for Piano and Strings,” written in 1951. Viennese composer Arnold Schoenberg influenced Gerhard’s 12-tone technique; yet despite the Austrian composer’s sway, the Spaniard heaped his music with plenty of Spanish tropes, said Lamas.

The program concludes with a scene from contemporary composer Ricardo Llorca’s opera Las Horas Vacias, which translates as The Empty Hours. By his own account, Llorca veered from the Spanish tendency toward Germanic influence.

“I have my own language, and that has nothing to do with nations,” said Llorca.

The selection to be performed Saturday, “Vocalise,” could take place anywhere, he said. The opera focuses on a woman who spends her Fridays alone and online.

She starts drinking with her virtual lovers and chatting about her mediocre childhood, said Llorca.

“It can happen to anybody in the world, and it can take place anywhere,” he said.

Despite two decades of teaching history and music appreciation at the Juilliard School, and the borderless theme of his opera, Llorca is often referred to as a Spanish composer, said Lamas.

“Llorca’s music represents the post-modern notion of Spain, yet his music is not ‘Spanish music,’” said Lamas. “What’s the Spanish boundary today? Is it a geographical boundary? That doesn’t work in contemporary terms. So our story concludes with someone who is beyond the discourse of national identity.”

Dylan Côté , FCLC ’15, and Victoria Oliver FCLC ’15 will be featured in the production as voice actors. The event is sponsored by the Dean of Arts & Sciences Faculty,  the Dean of Fordham College at Lincoln Center,  the Department of Modern Languages and Literatures, the Latin American and Latino Studies Institute, the Consulate General of Spain, and Acción Cultural Española.