skip to main content
Return to Fordham University
You are at:Home»Arts and Culture»Gabelli Student’s Music Takes Him Around The World

When Christian Voldstad isn’t tracking analytics in his marketing courses at the Gabelli School of Business, the globetrotting New York-based DJ is providing the soundtrack to underground parties as far off as Norway, Amsterdam, Chile, Peru, and Russia.

“It’s been rather unexpected, but it’s been exciting, and I’m really enjoying it,” said the MBA student, whose techno and house grooves have graced New York clubs like TBA Brooklyn, Schimanski ,Output, Electric Room and Cielo.

“I’m able to apply a lot of what I learned in marketing to my DJing, and that’s where I see the most results because I have full control over everything I do. With clients, you can suggest what they can do [to market their products better], but you have to work with what they give you.”

This month, Voldstad will be adding another stamp to his passport. He travels to South Africa from April 24 to 30 to DJ for AfrikaBurn, a regional arts and music festival in Tankwa Karoo, a semi-arid desert. The festival is based on the Burning Man festival held annually in Nevada’s Black Rock Desert and where Voldstad has played regularly.

“I’ll be in the desert for four or five days, and hopefully an event in Cape Town before I come back to the United States,” said Voldstad. “I’m looking forward to it. I’ve been to South Africa once before on a safari, but never for music.”

Music for a cause

In February, Voldstad participated in the Music & Art Peace Academy project in Chile and Peru. Led by the international nonprofit organization Peace Boat US, the annual tour involved 14 events across Chile and Peru with multiple DJs and music producers from around the world.

“[The] events raised funds and awareness to help protect the wilderness in Patagonia, which the organization believes should be designated a World Heritage site by UNESCO,” said Voldstad, who also served as the digital director of the tour. An organization affiliated with the United Nations, Peace Boat US works to promote a culture of peace and sustainability through its Global Voyages, visiting more than 20 countries every three months. 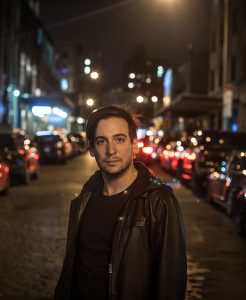 Voldstad was invited to travel on the Peace Boat from Chile to Peru, where he participated in lectures and workshops about sustainable development and the power of music to make a positive change in the world.

Through the Music & Art Peace Academy tour, Voldstad was able to turn his experience in event marketing, ticket sales, social media, and advertising into an independent study curriculum at the Gabelli School.

Voldstad said his professors encouraged him to use his business training in unique ways—and he didn’t have to take his hands off the turntables in the process.

“It’s been really cool to see Fordham support something as esoteric as a music tour in South America,” Voldstad said.

Turning passion into a career

Originally from London, Voldstad said he developed a love of music when he learned to play the piano, trumpet, and baritone horn as a child. After moving to New York he learned to work with turntables, vinyl records, and to mix. Eventually he began playing gigs at small lounges and nightclubs around New York City.

While nurturing his DJ passion over the past five years, Voldstad has worked in the nightlife industry in New York providing marketing support to a number of nightclubs and event production companies, including Output nightclub and record labels such as Hidden Recordings, Bespoke Musik, and Hot Creations. He is also a guest lecturer at NYU School of Continuing and Professional studies where he presents on social media best practices and introduction to analytics and advertising.

“You can download giant spreadsheets of data, and sort and categorize that in different ways,” he said. “It’s very useful—not only to identify trends and customer behavior, but also to use as benchmarks and to track progress, sales, and social media metrics,” he said.

Working with both digital and physical music formats presents interesting marketing challenges too, he said.

“I categorize digital music as an impulse item, because it’s low-cost,” he said. “When you’re trying to sell it, you create ads and try to get attention, and then you’ve got to do a preview to increase the intent to buy.

“With regard to physical media and vinyl records, you have to sell the entire EP—not just snippets.”

Whether he’s DJing in South America or entertaining New York partygoers with house mixes, Voldstad said connecting with people through music is the most gratifying part of DJing.

“Most of the consumers that I deal with are proactive,” he said. “Instead of downloading a file online and listening to it at home, they come out specifically to gather with other people and listen to music.”

“They say, ‘Oh my God. That was amazing. I had a good time. I’ve been working all week and it’s really made my night.’ And they’re laughing, smiling, and dancing. That’s something that I find pretty priceless.”