skip to main content
Return to Fordham University
You are at:Home»Arts and Culture»Show Offers Rare Glimpse into What Shapes Theater Critic

On his podcast show Person Place Thing, Emmy Award-winning host Randy Cohen invites his guests to reveal the person, place, and thing that they find most meaningful in their lives.

Brantley appeared at Fordham on Oct. 13, when the Fordham Theatre Program presented a live taping of Cohen’s show onstage in the Pope Auditorium.

Brantley, who has been reviewing plays for The New York Times since 1993, was Cohen’s sole guest for the taping. The critic said he met Vanderbilt while working at Women’s Wear Daily during his early years in New York. For Brantley, meeting Vanderbilt cracked open the city’s possibilities for him. 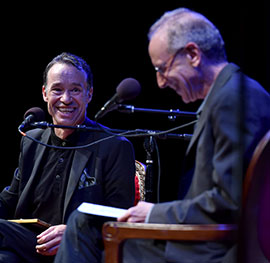 He knew he was destined for the city from a very young age, but when he arrived, he said it wasn’t exactly what he expected.

“It was an energizing place, but it wasn’t very attractive,” recalled Brantley of his early years in New York.

He said he had a preconceived notion of the city as a place brimming with “cocktail parties, martinis, and endlessly flowing champagne.”  But it wasn’t until he met Vanderbilt that he actually found the alluring lifestyle he always imagined and sought after.

“You would feel so at home,” Brantley said of Vanderbilt’s parties. “You could find yourself sitting next to Joyce Carol Oates and Kathy Griffin—and everyone would get along.”

To Brantley, Vanderbilt was one of the greatest fantasists, turning every space she inhabited into something glamourous.

“Glamorous to me suggests a type of mystery,” Brantley said, “[and]a suffusing light that makes everyone look their best.”

Brantley said he also found his fantasy in the National Theater in London, which he named as his place of meaning. A frequent traveler to London, he has always found the culture at the National Theater to be “a place of comfort and refuge.” He also said he finds that “theater as religion” exists more in London than in New York.

“You may not like everything you see, but the standards of production are so high and they are willing to take risks that subsidized theater can’t take,” Brantley said.

For his thing of meaning, Brantley presented the audience with a framed $100 bill on a piece of Jujamcyn Theaters stationery—given to him by Rocco Landesman, the chairman of the National Endowment for the Arts and part owner of the Jujamcyn Theaters. He offered a bit of back story by describing a character in the original Mel Brooks movie, The Producers, in which Zero Mostel tries to sabotage a play’s success by bribing a New York Times critic to give the production a bad review.

After Brantley, as critic, gave the musical a rare positive review, he received a letter in the mail the next day from Landesman with a crisp $100 bill folded into Jujamcyn Theater stationery.

To Brantley, who said he thought that becoming a successful theater critic was a “pipe dream,” the bill represented how far he has come in realizing his dreams.

The live taping was hosted by the Fordham Theatre Program. A second live taping will be held on Nov. 17and will feature Tony-winning director and Fordham’s Denzel Washington Chair in Theatre, Kenny Leon.