skip to main content
Return to Fordham University
You are at:Home»Arts and Culture»Shopping on Arthur Avenue for Christmas
Mike Teitel, FCRH ’80, co-owner of Teitel Brothers, sells a variety of panettone for holidays. (Photos by Tom Stoelker)
Of the thousands of New York City venues where you can buy Italian food for the Christmas table, there’s perhaps nowhere more authentic than Arthur Avenue and 187th Street. There, generations of Fordham families have bought food for the holidays, and generations of shopkeepers have welcomed them in. On a recent visit, several owners offered sage advice on what to pick up and bring home for the festivities.

Torrone and roccoco cookies grace the window of Gino’s. 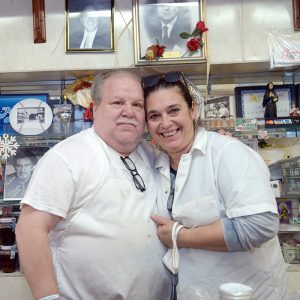 Jerome and Giovana Raguso have been holding down the fort at that same spot that Jerome’s grandfather Gino opened in 1960. The week before Christmas, Giovana sat at one of the small tables speaking Italian with her mother who was visiting from Naples. Jerome pulled baked goods from the window to show a visitor the traditional sweets for the season. They included honey balls, also known as struffoli, a pile of little lemon-flavored flour balls bound together with honey syrup. He also suggested almond roccoco cookies, a doughnut-shaped cookie with notes of orange zest. The store also makes terrone, a cruchy almond brittle. Lastly, he recommended dark chocolate mostaccioli cookies flavored with cinnamon, which he makes soft for his more senior clientele.

“That’s like an old-school thing. A lot of the customers who buy that are a bit older, so we make it soft for them. They’re usually hard, but they make them soft in Italy too,” he said. 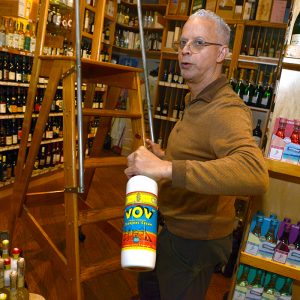 Opened in 1935, Mount Carmel is acknowledged as one of the great New York liquor stores specializing in Italian wines. But in true Bronx fashion, it’s owned by Dominican-born and Fordham-educated Raymond Polanco, FCRH ’95. After years working at Windows on the World, Polanco came back home to the Bronx and bought the shop 25 years ago.

“Basically, the store has a reputation, and I built on that,” he said.

When asked how the Italian community took to his taking over the shop, he said it boils down to knowledge.

“Everyone knows we specialize in Italian wines, so, my talent, my knowledge, it shows. If it didn’t, they’d know,” he said. “I study, breathe, and drink Italian wine.”

For Christmas Eve’s Feast of the Seven Fishes, he recommends Lacryma Christi del Vesuvio, which translates as Tears of Christ and has been grown for centuries outside of Naples. He also recommends a delightful Italian version of eggnog known as Vov, or Zabajone Cream. A Dominican version is Crema de Oro, but Polanco’s Caribbean preference is the less-sweet Ponche Kuba liqueur from Barbados. 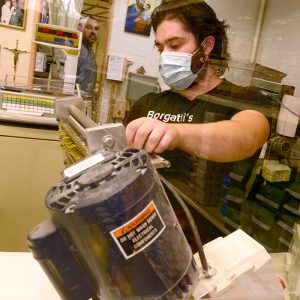 It’s not an Italian feast without pasta. For that, the go-to place for nearly 90 years has been Borgatti’s on 187th Street.

“We just celebrated our 86th birthday, so we’re one of the younger ones on the block,” said Christopher Mario Borgatti, FCRH ’19.

His dad, Christopher Paul Borgatti, recommends ravioli for Christmas. But the family team (mom Joan also runs the business) can cut fresh pasta to any size needed: from angel hair to spaghetti and fettuccini to lasagna. In addition, daughter Elizabeth designed a subway T-shirt for the shop that makes for a great Bronx-based gift.

Jimmy at Peter’s Meat Market pulls a fresh cut of pork butt from the walk-in fridge.

It’s nearly impossible to pick a favorite among Arthur Avenue’s many butchers, but there’s only one in the city-run food emporium, the Arthur Avenue Retail Market, and that’s Peter’s Meat Market. There, Peter Servedio works beside his cousin Michael Rella and a team that hails from Mexico, Albania, and Guyana. One worker, Jimmy, recommends the fresh pork butt for the Christmas table, though there’s wild boar, freshly made sausage, veal, lamb, and, of course, any cut of beef to choose from.

Frank Randazzo handles a live eel, one of the seven fishes traditionally served on Christmas Eve.

As “O Holy Night” played from overhead speakers, owner Frank Randazzo carried on a tradition that began with his grandfather back in 1925. He advised a customer on the order in which to serve seven fishes on Christmas Eve. The shop, which imports some its fish directly from Italy, has everything one needs to make the feast.

“Timing is everything. First, you have the octopus and scungilli with salad, because that can be made in advance,” he said. “You can then fry the shrimp and fillet of sole together, some do branzino. But it depends on what you get—for us it’s scallops, shrimp, and filet of sole. Then, they go right on the table. Last, it’s the baccalà [salt cod] and eel.”

For everything else needed for the holiday, from cheese to olives to the obligatory Christmas panettone, Mike Teitel, FCRH ’80, can assist. His family has been serving Fordham customers Italian delicacies since 1915. It’s the sort of place where one overhears the names of world-famous chefs being discussed alongside hard-to-find ingredients, which, in the unlikely chance they don’t have it, Mike will tell you where to get it, especially if you’re a fellow Ram.

“I was a professional chef while going to Fordham, and then I had a successful restaurant before retiring in 2005,” said Teitel. “I’ve come full circle. I love working here and meeting the students. It’s like a homecoming.”