skip to main content
Return to Fordham University
You are at:Home»Arts and Culture»Second Chair to Enhance Orthodox Christian Studies at Fordham

The gift comes from Solon and Marianna Patterson, whose philanthropy at Fordham had previously endowed the Patterson Triennial Conference on Orthodox-Catholic Dialogue, a distinct initiative of the University’s Orthodox Christian Studies Center.

“We are deeply grateful to the Patterson family for making possible this addition to serious scholarship in Orthodox studies at Fordham,” said Joseph M. McShane, S.J., president of the University. “John Meyendorff was the most significant English-speaking historian of Byzantine Christianity in the 20th century, and a familiar presence at Rose Hill. We are therefore very pleased that his name, as well as that of the Patterson family, will forever be associated with Fordham.”

As an academic discipline, Orthodox Christian studies is a relatively new, interdisciplinary approach to examining of an archipelago of cultures. Eastern Orthodoxy refers to a cluster of religious traditions that for millennia have been the dominant form of Christianity throughout Asia Minor, the Balkans, Eastern Europe, the Middle East, and Russia. 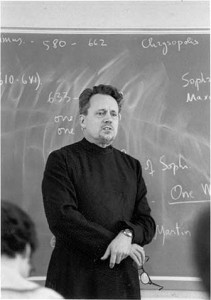 The Meyendorff/Patterson Chair was specifically created to enhance Orthodox Christian studies by supporting scholarship and teaching focused on the relationship between Eastern Orthodox and Roman Catholic traditions. Promoting the churches’ unity is a cause that resonates deeply with the Pattersons. Born in Greece, Solon Patterson was raised Greek Orthodox and Marianna, his wife, was raised Roman Catholic. When they married in Atlanta, Georgia in 1961, they still maintained their separate faiths; as a result, they found they faced formidable obstacles.

“We did struggle, and in spite of these obstacles, we’ve been married for 54 years,” said Solon Patterson. “We’d like to help other couples like us who might not get married because of these religious differences—which we’ve found over the years are not really significant.”

Graduates of Emory University, the Pattersons had no previous connection to Fordham before traveling to Istanbul, Turkey in 2004 to see the return of the relics of St. John Chrysostom and St. Gregory the Theologian, which had been seized by crusaders more than 800 years ago. There, they met Fordham Professor of Historical Theology George E. Demacopoulos, Ph.D., who was instrumental in facilitating the relics’ return.

“You have in the Pattersons a kind of pioneering family, in the sense that they were one of the first Orthodox-Catholic couples whose marriage was recognized by both churches,” said Demacopoulos. “In Fordham’s Orthodox Christian Studies Center, they see an opportunity to allow education to shift the ecclesiastical landscape and to provide the resources by which future families like their own can navigate the world of interfaith marriage in a healthy way.”

It was Papanikolaou who suggested to the Pattersons that they name the new chair to honor Protopresbyter John Meyendorff, a professor of Byzantine history at Fordham from 1967 to 1992, and dean and professor of church history and patristics at St. Vladimir’s Orthodox Theological Seminary in Yonkers.

Papanikolaou said that, while he was a Fordham student, he had the privilege of taking one of Father Meyendorff’s classes and having him as the adviser to his honors thesis.

“He laid the groundwork for the creation of the Orthodox Christian Studies Center at Fordham,” said Papanikolaou. “This chair will always remind us of his invaluable role in the story of Orthodoxy.”

Father Meyendorff’s son—Paul Meyendorff, the Alexander Schmemann Professor of Liturgical Theology at St. Vladimir’s—said his father would appreciate the significance of an academic chair at a Catholic university being named after an Orthodox scholar.

“He was able to see through all the polemics and take a more objective view of history, seeing the weaknesses and strengths of both sides, which is an absolute prerequisite for any kind of observation,” he said.

The Pattersons hope that the research generated by the chair holder will influence the next generation of church leaders. Marianna Patterson said that now more than ever a reunion is needed, as secularism and radical Islam threaten the western and eastern churches, respectively.

“Our original intent is still to bring about the reunion, but with the passage of time, I think our reasons have broadened,” she said. “We feel that if the churches were united and could speak with one voice, they’d be far stronger. Neither of us sees why either church needs to change and become like the other for that to happen.”

The inaugural chair holder will be announced in summer of 2015 and installed at a special ceremony the evening of Monday, Oct. 5 at Fordham’s Rose Hill campus in the Bronx. For more information, please contact Valerie K. Longwood at [email protected] or 212.636.7439.