skip to main content
Return to Fordham University
You are at:Home»Arts and Culture»Judaica Scholars to Discuss Jewish Culture in Art and History

A lecture series sponsored by the Jewish studies program is bringing some of the foremost leaders in Jewish thought to Fordham.

The series features high-profile scholars from both the United States and abroad, including Israel and Poland, said Magda Teter, PhD, the Shvidler Chair in Judaic Studies. There are two notable lectures in March to be held at Fordham Law.
.
“We’ll be covering a diverse range of topics—from north African Jewish communities to contemporary museum interpretations,” she said.

On Wed., March 2 at 6:30 p.m., award-winning authors Marc Epstein, PhD, professor of religion at Vassar College, and Sara Lipton, PhD, professor of history at the State University of New York at Stony Brook, will participate in “Jews in Medieval Art: A View From the Inside and Outside.” The scholars will look closely at the medieval origins of anti-Jewish iconography.

Lipton has researched how medieval Christians’ manner of worshiping the suffering Christ led to negative portrayals of Jews in art, said Teter. Epstein has studied how Jewish art and iconography are complicated because of an “ostensible biblical prohibition against visual representations.” Epstein’s work, like those of other scholars whose work focuses on Jewish art, contradicts the perception that Jews did not represent themselves in art. 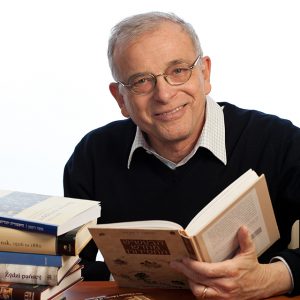 On Mon., March 14, at 5:30 p.m., Moshe Rosman, PhD, professor of history at Bar Ilan University in Israel, will discuss how contemporary Jewish museums interpret the Jewish story in the age of smartphones and the trend at contemporary history museums to eschew artifacts in favor of multimedia, said Teter. In “How to Tell the Story: Jewish Museums, Jewish History, Jewish Metahistory,” Rosman will analyze five Jewish historical museums.

Teter said that Rosman has changed the study of Eastern European history in Poland by promoting the study of Jewish history in tandem with the nation’s economic history, as they are both “interdependent stories.”

He also revolutionized the study of Hasidism, she said. The scholarly field was solely dependent on Jewish sources until Rosman included research from the Polish state archive.

“He entirely changed the way we see how Hasidism is organized,” she said.