skip to main content
Return to Fordham University
You are at:Home»Arts and Culture»Return to Tomorrow

Fifty years ago, Fordham alumni brought Michelangelo’s first masterpiece to Flushing Meadows and helped make the 1964–1965 New York World’s Fair one of the most memorable spectacles of commerce, culture, and innovation in the city’s history.

This week and next, as New York celebrates the fair’s anniversary, Fordham Notes will publish excerpts from “Return to Tomorrow,” a feature published in the Spring 2014 issue of FORDHAM magazine.

For centuries Michelangelo’s Pietà has inspired awe in the hearts of the faithful. Carved from a single block of Carrara marble, it depicts the Virgin Mary cradling the crucified Jesus in her lap, her ever-youthful face and sorrowful eyes looking down at his slain body. But in March 1964, as John Murray, FCRH ’57, and two fellow shipping executives stared at the priceless sculpture in St. Peter’s Basilica, their sense of wonder gave way to fear. 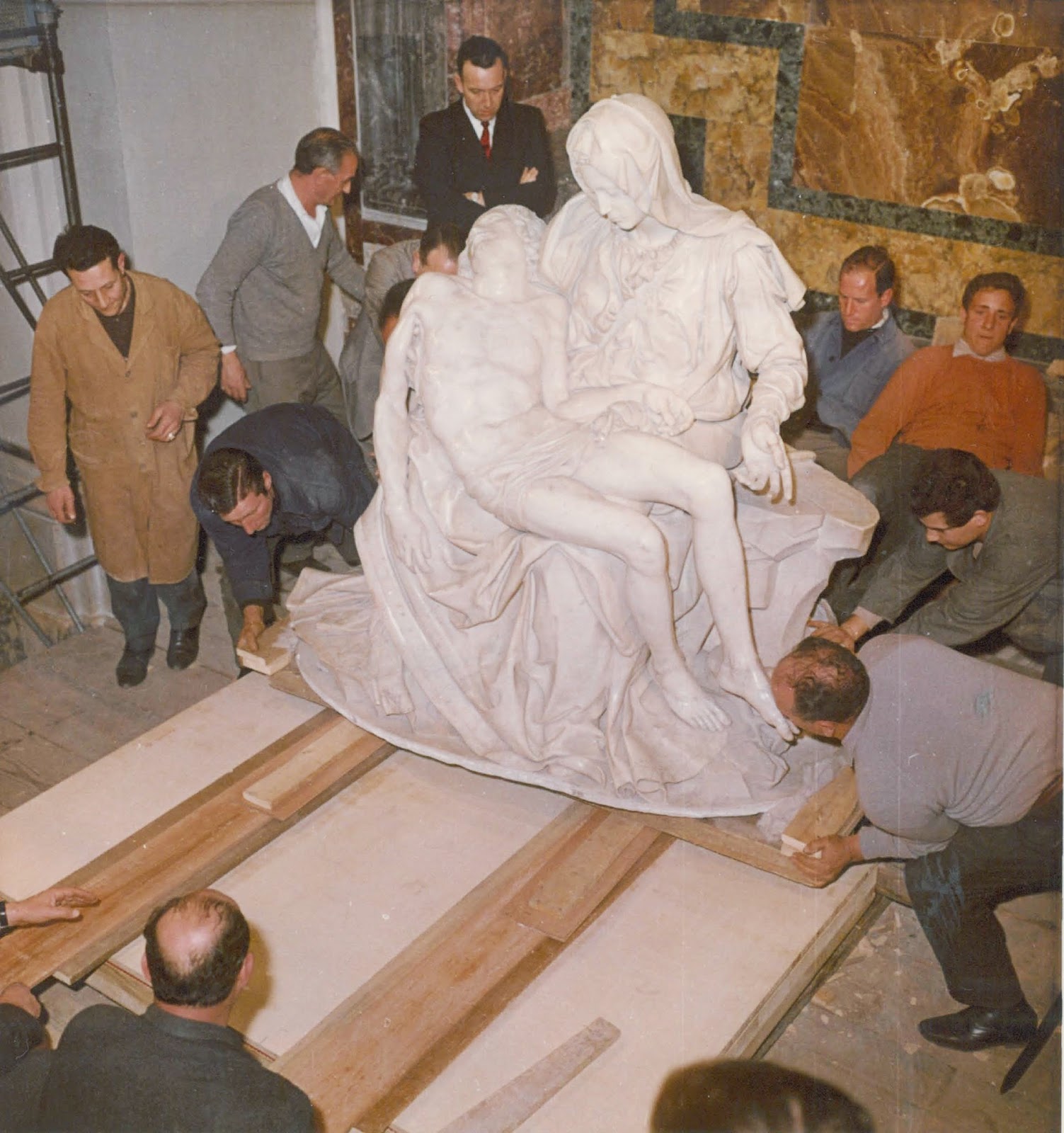 Two years earlier, Pope John XXIII promised New York’s Francis Cardinal Spellman, FCRH ’11, that he would send the Pietà—perhaps the world’s most famous religious sculpture—to the 1964–1965 New York World’s Fair in Flushing, Queens. The pontiff had just opened the Second Vatican Council, and the decision to display the Renaissance masterpiece to throngs of fairgoers reflected the church’s new commitment to accessibility in a modern, increasingly secular world.

Now this trio of expert transporters was charged not only with removing the Pietàfrom the Vatican for the first time since 1499, but also with shipping it to New York and back in one very well-preserved piece.

Murray, who died last September at the age of 83, had joined his Fordham classmate’s family trucking firm, McNally Brothers, just after college. By 1964 he was vice president.

“When the idea [of bringing the Pietà to the fair]came to life, my father took advantage of the opportunity,” said John Murray Jr., GSB ’85. “He got involved with the committee and offered to do the moving for free.”

After Pope John died in 1963, his successor, Pope Paul VI, reluctantly honored the papal promise to send the sculpture to New York. Italians and art lovers fretted, however, about the safety risks as well as the perceived lack of reverence it would be shown by the American masses. But in March 1964, Cardinal Spellman told the Associated Press that critics may “have the money to go to St. Peter’s to see it for themselves. But I want 70 million people to see it for free.”

Populism won out, and the Pietà would soon set sail for the U.S. But before Murray and his colleagues could ship the 3-ton marble treasure, they had to pack it and protect it.

Italians had traditionally used wood shavings to cushion fragile items. But the Americans suggested a new material—expanded polystyrene, later trademarked as Dylite. According to one newspaper’s account, the Roman contractor quit in protest.

Save for Mary’s hand, which had been broken and repaired, X-rays revealed that the sculpture’s marble was perfect, just as Michelangelo had once proclaimed. Still, the packers assumed that minute fissures were present and could be worsened by the slightest impact. They gingerly removed the statue from its pedestal, placed it on cushioned scaffolding, and built a wooden case around it. Then they poured in the Dylite, thousands of tiny snow-like white foam beads, which had the added effect of making the crate and its contents buoyant despite a combined weight of 5 tons.

The Pietà was ready for the first leg of its journey.

Read part II and part III of “Return to Tomorrow,” including the Pietà’s voyage to Flushing, the role of Thomas Deegan, FCRH ’34, and alumni memories of the fair.