skip to main content
Return to Fordham University
You are at:Home»Arts and Culture»Redemptive Power of Storytelling Anchors Theatre’s Mainstage Season Finale
Photos by Patrick Verel
If the world went to hell in a handbasket today, what stories would you tell to help you get through tomorrow?

In Mr. Burns, A Post Electric Play, the final production of Fordham Theatres’ mainstage season, the answer for survivors of an apocalyptic event is an episode The Simpsons. In particular, the strangers bond over a retelling of Cape Feare, which first aired in October, 1993 and focuses on the family’s flight to escape the wrath of Sideshow Bob, a reoccurring character voiced by Kelsey Grammer.

Written by Anne Washburn, the play debuted in 2012, and enjoyed a three-month run at New York’s Playwright Horizons in 2013. Elizabeth Margid, head of directing at Fordham Theatre, saw it then with lighting and set design professor Chad McCarver, and was immediately smitten. 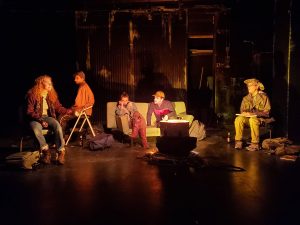 When they’re not reaching for guns to defend against strangers, survivors in act one recall happier memories.

Part of the appeal was the play’s unconventional format. The first act is set in an unspecified moment in the future after an event that has knocked out all power and plunged the country into chaos. The second act is seven years later, and the final act takes place 75 years after that.

“The first act is quite naturalistic, and the second starts to incorporate some elements of sit com acting and commercials, because the characters who meet in the first act form a theater that goes from remote outpost to remote outpost to perform Simpsons episodes. Seventy-five years later, we’re in a completely new theater company that’s turned this episode into a mythic, almost like Medieval pageant play,” she said.

“It’s jaw-droppingly theatrical. And odd. And I was grabbed by the style, the form and the themes of the piece. I couldn’t predict what was going to happen next in this crazy piece, and I loved that. It was unlike anything I’ve seen before,” she said.

The material will be familiar to anyone with a passing familiarity with the show, but hardcore Simpsons’ fans will be disappointed if they’re expecting a simple live-action re-enactment of Cape Feare. Because it’s set in a time when no one has access to television anymore, recollections are subject to characters’ memories.

Just as works of art from the past are reinterpreted with current cultural concerns, so too is Cape Feare transformed into a mythic story about survival, going so far as to replace Sideshow Bob with Mr. Burns, another reoccurring character and owner of a nuclear power plant, as the main villain. 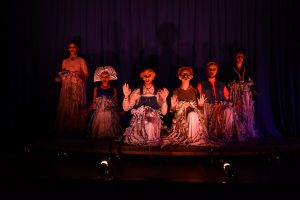 Willie the Groundskeeper and Ned Flanders (center), join the chorus in act three.

Ella Stoller, a junior at Fordham College Lincoln Center who plays a survivor in the first two acts and a chorus member in the third, studied the play last year in a text analysis class. A big challenge for her is imagining how her character might evolve during the seven-year interlude between acts one and two. The stakes are much higher in the second, and yet at one point, the survivors take a break from rehearsing to debate how many cans of Diet Coke still exist.

“On the page, it’s this hilarious bit. Like, are they really gone? Who knows? But then you dig into it, and like there’s all the subtext about the different relationships and the fact that we’re in Oklahoma, it’s 3 p.m., we’re in a warehouse and it’s 90 degrees. And if we don’t get this show put together by the end of the night, our show tomorrow will fail and we won’t eat and we might not be safe or have a place to sleep,” she said.

In the distant apocalyptic future, it is Mr. Burns, not Sideshow Bob, who is the villain of the story.

To prepare for their roles, Margid also had two of Stoller’s colleagues watch the episode Homer the Heretic. While they faced the screen, she sat with her back to it, and was only allowed to turn around periodically to watch it, for ten second intervals. The point was to appreciate how fickle memory can be.

“Jenny and Matt got to watch the whole thing, so they had bigger chunks of it, but there were moments where I heard something that they hadn’t picked up on because they were watching it, so I got a word or a phrase or a sound effect that neither of them remembered. That drove forward our act,” she said.

Staging is unique to the play as well, especially the clothes and masks used in the third act. Costume designer Siena Zoë Allen, FCLC ’15, worked with Margid in 2016 on the mainstage production of White People, and returned again to work with her alma mater. 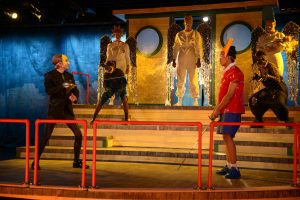 In the final act, Cape Feare is recast as a mythic story about survival.

Since there’s no way to know how much of society has been rebuilt 75 years later, it was decided that plastic—in the form of sheets, bags, bottles and wrappers—would be the backbone of their sartorial choices. Suffice to say, there are few manuals for making clothes with that material.

“If you iron a bunch of plastic bags to make a very long sheet of fabric and clothes, it doesn’t behave the way normal fabric should. When you put it on a body, it doesn’t bend, it doesn’t fold, it’s not graceful. So it’s been a very large learning process for all of us,” she said.

“It’s very different than fitting for a normal show, where if pants don’t fit, we can let them out with fabric that already exists. We are in charge of making the fabric, fitting the fabric, and making sure it matches the rest of what’s already been made. We can’t just start from scratch, so we do have to sort of adjust. It’s been fun.”

For Margid, the takeaway from the play is that art in general, and story-telling in particular, is not a luxury, but is in fact deeply entwined with the survival of the human spirit.

“At the absolute core of this piece, is a kind of Valentine to the power of theater to bind us together in dark times and to provide a place for collective emotion and reflection,” she said. 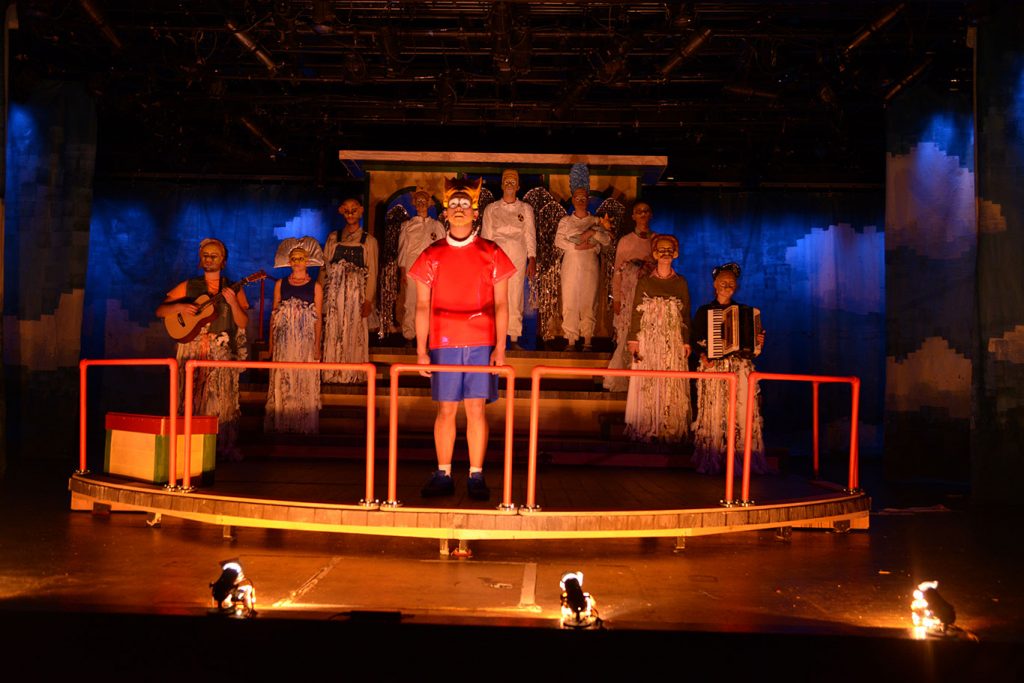 “At the absolute core of this piece, is a kind of Valentine to the power of theater to bind us together in dark times and to provide a place for collective emotion and reflection,” said director Elizabeth Margid.