skip to main content
Return to Fordham University
You are at:Home»Arts and Culture»Quinn: A 21st Century Library with a 175 Year Legacy 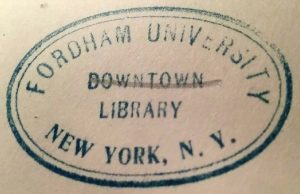 Quinn Library absorbed books from Fordham’s downtown campuses, which had stamps on the inside leaf like the one above.

It was dark and dreary, but the old Quinn Library held fond memories for generations of Lincoln Center students—even if it wasn’t an ideal place to study.

Now, instead of one rambling open floor plan down on the lower level, lit entirely by florescent lights, a new Quinn Library staggers across three floors and opens to the sun.

“For years we were removed from weather and time,” said Linda LoSchiavo, director of Fordham Libraries. “The big joke became if someone came in with a wet umbrella we’d say, ‘Oh, it must be raining.’ Just the fact that there are now windows and sunlight pouring into this building is a sea change.”

The new library reflects the urbanity of a vertical campus in Manhattan, said LoSchiavo. Situated in the freshly renovated 140 West 62nd Street building, the new library is a funky mix of building materials, with curvaceous metallic grids and wood panels dropping from the ceiling, and multi-colored patterns popping up from the floor.

“The campuses have their own distinct feel: Rose Hill is more the ivy-covered halls of academe and the Walsh Library reflects that, whereas Lincoln Center has an edgier feel,” she said. “We wanted something that picked up the pulse of the campus and the neighborhood. I think we achieved that.”

The library’s main level can be accessed from Robert Moses Plaza, where one enters a two-story atrium-like space with a balcony and catwalk that hover above the library’s lower level. The lower level has a community-focused room with access to the stacks, coffee, and conversation. Called the “Learning Commons,” it’s open 24 hours a day, Sunday through Thursday.

Just beyond glass doors on the balcony level sits the circulation desk, a staff area, and computers and study tables. On the third level is the “Quiet Zone” with private booths, tables, and six study rooms, four of which are equipped with smart technology.

More than 80,000 books have been moved to the new library, while more than a quarter million books will stay behind in the old, lower level space , now called Quinn X. Any book published before the year 2000 will stay at Quinn X, while all books published since 2000 have been moved to the new Quinn. The staff will retrieve books requested from QuinnX.

“It was a considerable achievement to tag 260,000 books with Quinn X stickers,” said Robert Allen, assistant director of Fordham Libraries. “We started in the summer of 2015 with teams of students putting the stickers on.”

A Manhattan Library with Roots in the Bronx (and Kentucky) 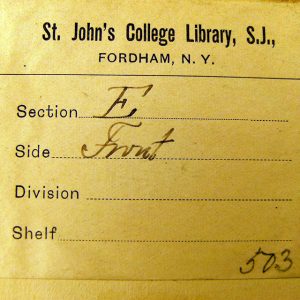 The Quinn library has its roots in St. John’s College Library, in “Fordham, N.Y.”

The actual move was done over the summer. It revealed quite a bit about the history of the Lincoln Center library, which is inextricably linked to the history of Fordham’s libraries in the Bronx and other long-gone Fordham libraries housed in former Manhattan locations, said Patrice Kane, head of Archives and Special Collections.

Many Fordham students are aware that, in the 1840s, Edgar Allan Poe was given free rein to use the college’s library when he visited to play cards with the Jesuits, who had brought their books with them from Kentucky when they started the university.

Eventually Duane Library housed the growing collection, until 1997 when the Walsh Library was opened. But in the early part of the 20th century, the Law School, the Business School, and the School of Social Service grew their book collections in their various locations in downtown Manhattan. (The social service library shared its collection with students from Dorothy Day’s School for the Catholic Worker.)

When the downtown collections were moved to Lowenstein in 1968, they barely filled the miles of empty shelves. So a request was made to Duane Library to send books.

Now nearly 50 years later, the renovation has rustled books from their sleepy shelves, revealing a few treasures here and there, like an 1896 edition of Pudd’nhead Wilson by Mark Twain.

The Mark Twain edition speaks to a 175-year legacy that makes up an extremely comprehensive liberal arts collection, said LoSchiavo, to say nothing of philosophy and theology.

“It is a testament to the faculty and the staff of the library, for the last 175 years, that we have the magnificent collection that we do,” she said. “I am often stunned when I see a book cited as a source, I’ll think, ‘I wonder if we have that?’ I’ll check and find that we do.

“That’s because of the combined knowledge, over 175 years, that has gone into putting the collection together.”