skip to main content
Return to Fordham University
You are at:Home»Arts and Culture»Professor’s Painting Unveiled at Fordham Law

The east stairwell connecting the ground floor of Fordham Law School to the plaza level was adorned with American artist Murray Dessner’s Hard Edge Gray Maroon from the day it opened last September. But the identical stairway to the west has always been devoid of ornamentation. 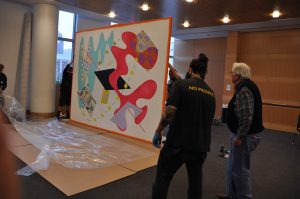 On Nov. 10, workers gingerly lifted Dream, a 10-by-13-foot abstract painting by William Conlon, into place onto the wall at the stairwell’s halfway section.

For Conlon, a professor of visual arts at Fordham College at Lincoln Center  since 1979 and former head of the visual arts department, the piece is a final send-off to the University after calling it home for 35 years. He will scale back his teaching duties next year before retiring.

He said he knew he wanted to give the University a piece for the space above the stairs the minute he laid eyes on it. Dream, one of the largest pieces he’s created in recent years, took him about a year to finish at his studio in Portland, Maine. 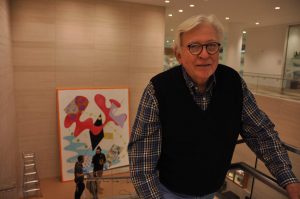 His hope for the work is embodied in the title.

“What a lot of students here need is to dream a little more, and so I set out to do a painting that’s about dreaming and about taking risks. Maybe it’ll inspire them to take on an adventure in their lives, in addition to an education,” he said.

The shapes and forms of the painting follow one another in a way that’s reminiscent of stream of consciousness, he said. The Chinese character for the word dream sits in the middle of a yellow square in the middle of the canvas; one of several elements that interlock with each other and force passers-by to take notice. 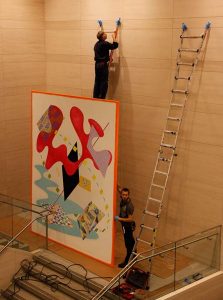 Workers prepare the wall for the painting. Photo by J Lawton

“I wanted to leave a legacy for the students, and the nice thing about being a professor and an artist is I can do that through a work of art,” he said.

An official unveiling of Dream and reception will be held next week Thursday, Nov. 19 at 6:30 p.m. in the Skadden Conference Center of Fordham Law School. You can RSVP through Friday, Nov. 13 at rsvp@fordham.edu. 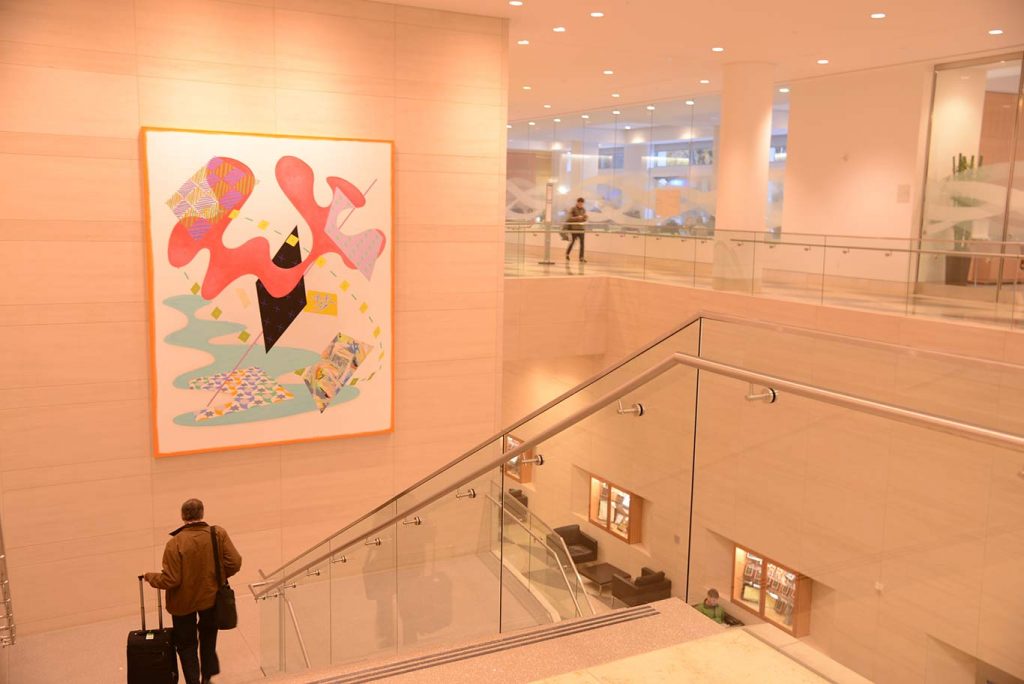 Dream hanging above the stairway. Photo by Patrick Verel