skip to main content
Return to Fordham University
You are at:Home»Arts and Culture»Professor’s New Book to Examine How Women Shaped the History of Jerusalem
Gribetz at the tomb of Helena of Adiabene in Jerusalem. Photos courtesy of Gribetz
Jerusalem’s history is abundant with stories about powerful men, but often leaves out the voices of its women, said Fordham professor Sarit Kattan Gribetz. In her new book Jerusalem: A Feminist History, Gribetz is documenting the city’s history with a focus on the women who helped bring Jerusalem to life.

“It’s common for historians and the general public to say that there are little to no sources about women from the past. There’s actually a ton of material, but it hasn’t been integrated into the way that we tell the history of the city,” said Gribetz, an associate professor of theology who was recently awarded a $60,000 National Endowment for the Humanities grant to work on her book. 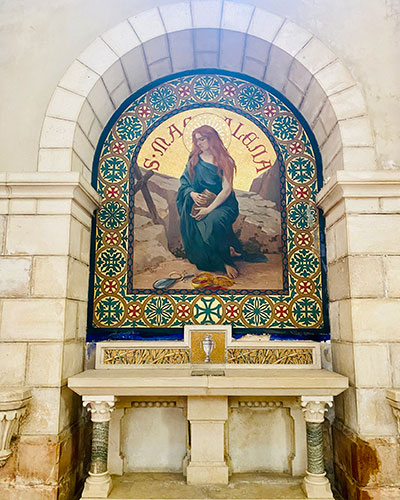 A depiction of Mary Magdalene at the Church of St. Stephen (Saint-Étienne)

“I want to shift our focus away from the usual suspects—King David, Emperor Constantine, Sultan Salah ad-Din—and toward the many women who made contributions to the city,” she said.

Jerusalem: A Feminist History will serve as a historical account of the city from Biblical times to the present—a period that spans more than 3,000 years. Instead of focusing on the city’s male leaders, it will highlight women from all social classes, from the queens of Jerusalem to enslaved women and servants from wealthy households, said Gribetz.

A Heroine from the First Century

Among the featured women will be Helena of Adiabene, a first-century queen. A native of modern-day Iraqi Kurdistan, Helena converted to Judaism and made a pilgrimage to Jerusalem. When she arrived, the city was suffering from famine. She used her wealth to import figs and other agricultural products from nearby countries. Thanks to her philanthropic efforts, she became a beloved figure in Jerusalem, said Gribetz.

“Helena is a woman from outside of the city who becomes a hero within Jerusalem. In the many centuries after her death, Jews and Christians continue to tell stories about her,” Gribetz said. “She’s actually a relatively minor character in the first century, but she helps us see new things about the city’s history.”

The city of Jerusalem itself is often personified as a woman and depicted in feminine terms, Gribetz said.

“In our earliest written sources about Jerusalem, people imagine the city as a sister, mother, partner, or widow. That personification of Jerusalem often happens when the city is in danger of coming under foreign rule or destruction in times of war,” Gribetz said. 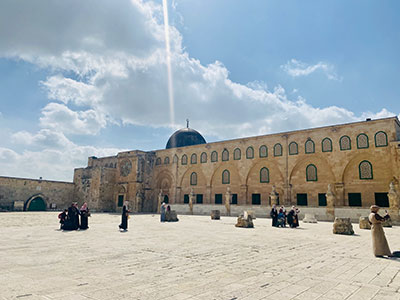 Gribetz said the inspiration for her book emerged during her first years at Fordham, when the Center for Medieval Studies asked her to teach a course on medieval Jerusalem.

“I kept noticing women in ways that I had never thought about, in terms of Jerusalem’s history,” said Gribetz, who taught the course for several years, beginning in 2016. “At a certain point, I realized that the way I constructed my syllabus was in line with this very standard narrative of Jerusalem’s history, but there were many other ways to tell that history.”

In the following years, she received research grants and support from Fordham, including the theology department’s Rita Houlihan grant, which allowed her to research topics that led to her book. She is currently living in Jerusalem, where she is interviewing scholars and locals, participating in city tours, and studying texts at libraries, museums, and archives. The texts include funerary inscriptions on tombstones from the Roman, Byzantine, and Islamic periods, as well as other archaeological remains, including from synagogues, churches, and mosques.

“Our literary sources often focus more on men than women, so we have to get creative with the kinds of sources that we use to reconstruct history,” said Gribetz. “But there are still many ways to find traces of these women.”

‘This History Belongs to Many Different People’

Through her book, Gribetz said she aims to push back against the idea that we’re limited in the kinds of stories we can tell.

“If we’re creative with the questions we ask and the sources that we use, then we can tell history in a way that incorporates the stories of a much broader segment of the population, whether it’s in Jerusalem or in other cities or contexts,” said Gribetz, who has also written Time and Difference in Rabbinic Judaism (Princeton University Press, 2020).

Gribetz will spend the coming few years writing the book, which will be published by Princeton University Press. In addition to exploring the history of women in Jerusalem, Gribetz said she also hopes that her book weaves together the stories of Jews, Christians, and Muslims and shows that the city’s diversity is a strength, rather than a liability.

“I would like to think that my book may help encourage people in all these different communities to appreciate what a beautiful thing it is to share such a deep history with the city, rather than to compete over who has exclusive claims to it,” Gribetz said. “I hope that my book conveys how complicated, interesting, and beautiful this history is, and that this history belongs to many different people.”