skip to main content
Return to Fordham University
You are at:Home»Arts and Culture»Professor’s New Book Finds Expression in Dance

Research meets motion this week at the Joyce Theater, as choreographer Camille A. Brown and the women of Camille A. Brown & Dancers present Black Girl: Linguistic Play, a new dance that addresses the question, what is it like to live in the body of a black woman?

For Aimee Meredith Cox, PhD, assistant professor of African and African-American Studies, the production, which runs through Sept. 27, combines her former life as a dancer with her current one as an ethnographer.

Cox was involved with the creation of the dance from its inception as a resident cultural anthropologist, and her book, Shapeshifters: Black Girls and the Choreography of Citizenship (Duke University Press, 2015)  is one of four cited as inspiration, along with The Games Black Girls Play: Learning the Ropes from Double-Dutch to Hip-Hop (NYU Press, 2006) by Kyra Gaunt, Alice in Wonderland by Lewis Carroll, and Wonderland: The Zen of Alice (Parallax Press, 2009 by Daniel Silberberg.

The piece, which Cox first saw last summer during a workshop on Martha’s Vineyard, is meant to reflect the nuance and complexity of being a black female. It’s a tricky task for the performers because it requires recognizing what unifies all black women and what differentiates them, and then expressing it physically.

“Her choreography is like nothing I’ve ever seen before in my life,” said Cox. “It takes technique in the traditional way that we think of being able to perform certain things in ballet or traditional concert dance terms, but it is so deeply rhythmic, and it requires a full body and spirit of the dancer 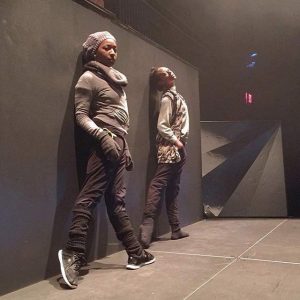 Apart from being a dancer herself, Cox said she related to Brown because in her recently published book about black teenage girls in Detroit, she tries to address how one’s body influences one’s sense of identity. She also relates to Brown’s insistence on audience talk-back sessions.

“Because she does not shy away from talking about race in a very real way, those talk-back sessions can get really intense. I think that speaks to the way I think about my work in the academy, and how research works,” she said.

As for the production, Cox said it’s a thrill to see her work reflected in performance—particularly in one of the three duets. There’s a sisterhood of sorts, she said, based around the notion of being ignored by the rest of society. She addresses the issue in a chapter in her book about sexuality and love.

“The dancers are watching each other, and you feel like they really do see each other on a deep level. I talk about the importance of visibility and being seen in the book, and you see that so beautifully captured in those duets,” she said.

Cox said that sitting through a performance made her feel—for the first time ever—the entire range of human emotions.

“What Camille has done is capture the emotional nuance of what it means to live in a black girl’s body. To see that onstage made me hope that’s what my book does too, even if its only one story, one paragraph, or one chapter,” she said.