skip to main content
Return to Fordham University
You are at:Home»Arts and Culture»A Modernist Look at the Relationship Between Bodies and Language 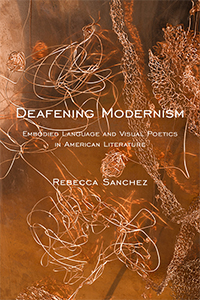 It is often assumed that disability studies are of relevance primarily to disabled people. But a new book by Rebecca Sanchez, PhD, assistant professor of English, shows how deafness in particular can offer insights into non-normative language use, a subject that fascinated modernist writers.

Most research in disability studies, however, almost exclusively features a disabled character that the viewer or reader can point to, she said. This somewhat obvious approach misses a great opportunity to look at other works of art from a fresh perspective.

“I wanted to make good on the claims that disability studies has always been making,” she said. “I wanted to pull a text that’s experimenting with language and to think about the relationship between bodies and language, but where there’s no obviously disabled character as the subject.”

Among the many modernists examined in Deafening are several outside of literature, including director Charlie Chaplin. But the bulk of the book examines writers and poets, such as Sherwood Anderson and Hart Crane.

Sanchez examines Anderson’s short stories set in Winesburg, Ohio and the way he deals with non-normative bodies. Through his characters Anderson looked at how people’s lives are damaged when they are forced to interact with and communicate in normative ways.

“There was a panic in the U.S., specifically in the fact that we had such a heterogeneous citizenry, and there was a desire for a language that a lot of people were calling ‘American.’ The language had to be standardized and people’s bodies had to look a certain way.”
She said that Chaplin’s film Modern Times makes a strong case for non-normative communication. Filmed in 1936, the movie was one of the last films of the silent film era, and was only able to be made amidst the “talkies” because Chaplin financed the film outside of a Hollywood system that had already shut the door on the form.

“Part of the film’s argument is that you don’t have to speak or communicate normatively to tell a story that you can do with your body,” she said. “There are other ways to pass information and that was hugely relevant to what was going on in deaf education at the time, where people argued that you have to learn to speak.”

Sanchez notes that the beginnings of the modernist movement are set against the backdrop of a societal push for conformity, eugenics, and other ideologies that proved fertile ground for fascism and nationalism.

“There was a panic in the U.S., specifically in the fact that we had such a heterogeneous citizenry, and there was a desire for a language that a lot of people were calling ‘American,’” she said. “The language had to be standardized and people’s bodies had to look a certain way.”

At the time those who were considered different—from indigenous Native Americans to the disabled—were sent to boarding schools where they were stripped of their identity and taught to conform. At the flip side of this movement were the artists.

“The artists were doing interesting things in the opposite direction,” she said.

She added that looking at the modernism through deaf studies might help unpack some of the obsessions of the movement, including “difficulty.” She noted that T.S. Eliot once said the modern world is difficult, so, therefore, the art has to be difficult.

“This is how you get texts, like Ulysses, that are deliberately trying to challenge you to look at language in new ways, and to be aware of how sentences and words get constructed so that the artifice is always in your mind,” she said. “Sign languages function in that way. And that gives us a new lens through which to look at some of these things they were doing with language.”

It is what the area of disability studies is doing now, she said.

“We can have a nuanced conversation without saying that all bodies can or should be the same, or that [sameness]should be some sort of societal goal.

“Deafness is not a problem to be fixed.”