skip to main content
Return to Fordham University
You are at:Home»Arts and Culture»Professor Calls for Return to Regional Planning’s Utopian Age 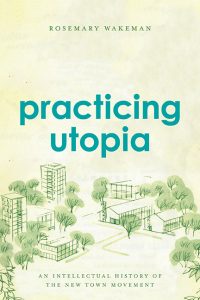 In 2010 New Jersey Governor Chris Christie killed a proposed $8.7 billion commuter rail tunnel between New York and New Jersey that could have alleviated congestion for the nation’s sluggish Northeast train corridor from Washington D.C. to Boston.

That decision, said Rosemary Wakeman, PhD, professor of history, exemplifies the issue between city and state boundaries when it comes to regional planning. “Boundaries create a politically immobile region where people cannot make easy decisions,” she said. This can affect regional transportation, education, social welfare, and access to health care for communities.

And while the city of New York holds 8.5 million people, the metropolitan region contains over 20 million, many of them living in so-called suburbs.

“From an urban studies point of view, we would like to stop using the term ‘city’ and ‘suburb’ because it no longer functions for what we have in front of us in terms of large-scale metropolitan regions,” said Wakeman, director of the urban studies program. “We think that both terms are vocabulary from the past, and we have to start building in a different direction.” 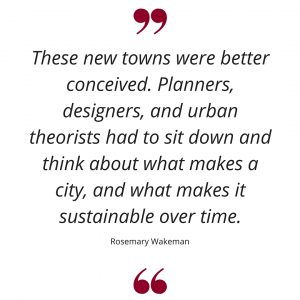 Wakeman’s new book, Practicing Utopia: an Intellectual History of the New Town Movement (University of Chicago Press, 2016), examines that past. The book looks at a period when planners thought regionally and imagined “full-bodied programs of infrastructure.” The period, which stretches from the 1950s to the 1970s, spurred the growth of “new towns,” or self-contained communities spread throughout existing metropolitan regions.

Many of the new towns, such as Irvine, California, Columbia, Maryland, and Milton Keynes, Great Britain, were very successful–much different than the post-war tract housing community developed just outside of New York City and Philadelphia known as Levittown, which Wakeman characterized as “suburban sprawl.” Levittown was a residential development; new towns were “literally entirely composed towns” with commercial, civic, residential, and commercial areas. The ones that have thrived have done so because of continued investment and continued involvement by the population. Milton Keynes’ parks trust, for example, supports its community’s green spaces through ownership of commercial properties.

“These new towns were better conceived,” she said. “They had employment options, parks, schools, the works. Planners, designers, and urban theorists had to sit down and think about what makes a city, and what makes it sustainable over time.”

It’s the sort of forward-thinking exercise that’s desperately needed once again in the United States, she said.

Today’s metropolitan regions are “multi-nodal” and more akin to a patchwork of communities than one singular entity, said Wakeman. There are pockets of tremendous poverty in Camden, New Jersey, for example, that are just as troubling as they are in the South Bronx, New York. But while the South Bronx shares in tax dollars collected on Manhattan’s Upper East Side, Camden and poor towns like it do not necessarily reap similar benefits. 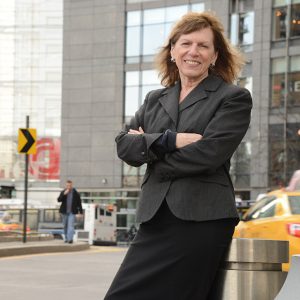 “We have to get away from the idea that it’s simply the South Bronx that’s underserved. Wealth and poverty are just as concentrated, and just as segregated, in New Jersey and Connecticut as they are in New York. Some of the worst islands of deep poverty are in New Jersey, but they are certainly within the New York metropolitan region,” she said. “The poverty of the suburbs is well-hidden so we have to work from a more complicated understanding of metropolitan regions than the idea of the classic city and suburb.”

Wakeman noted that immigrant communities, traditionally associated with big cities like New York, have skipped beyond them and settled into suburban enclaves—though much of the services for immigrants still remain in large urban centers.

“So for today, the term ‘suburb’ just doesn’t get it,” she said. “Political boundaries and divisions make it extremely difficult to create any kind of regional policy that takes into account this much more complicated picture.”

She noted that there are many regions around the world moving forward with groundbreaking infrastructure; for example, in Europe, many countries are well connected by high-speed rail.

The United States, and the New York metropolitan region in particular, are falling disastrously behind.

“That’s a real problem, and the question is can anything be done about it,” she said. “We talk about political corruption and incapacity in other places—like Brazil or India—but we really need to look at ourselves,” she said.