skip to main content
Return to Fordham University
You are at:Home»Arts and Culture»Preserving an Endangered Syriac Textual Heritage
A digitized page from the 14th-century Syriac world chronicle
Though Syriac Christianity is one of the oldest Christian cultures, many people in the West are unaware of its existence and unfamiliar with its traditions.

If we recognize, however, that some of Syriac Christianity’s most important ancient centers—Nineveh, Babylon, and Beroea—are today’s Mosul, Baghdad, and Aleppo, we get a better understanding of how it is imperiled by today’s violent conflicts. 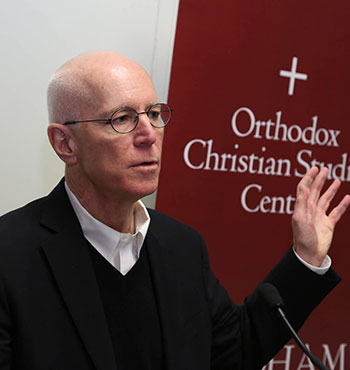 Now, some of the most beautiful and sophisticated Syriac manuscripts of the ancient world are at risk of being lost forever, said one of the world’s leading experts on Syriac texts.

Columba Stewart, O.S.B., professor of theology at St. John’s University in Collegeville, Minnesota has spent the last decade in a passionate quest to locate and preserve the vast textual heritage of the Syriac Christian world. On Feb. 6, he shared stories about this work with a capacity audience at the Lincoln Center campus in a lecture titled “Out of the Flames: Preserving the Manuscript Heritage of Endangered Syriac Christianity in the Middle East.”

Father Stewart, a Benedictine monk, is the executive director of the Hill Museum and Manuscript Library (HMML) at St. John’s, which began photographing manuscript collections for microfilm in the 1960s, focusing mainly on Europe.

“In 2003,” said Father Stewart, “we made two important decisions—number one, we decided to turn toward Eastern Christian collections in the Middle East, and number two, we went digital.” 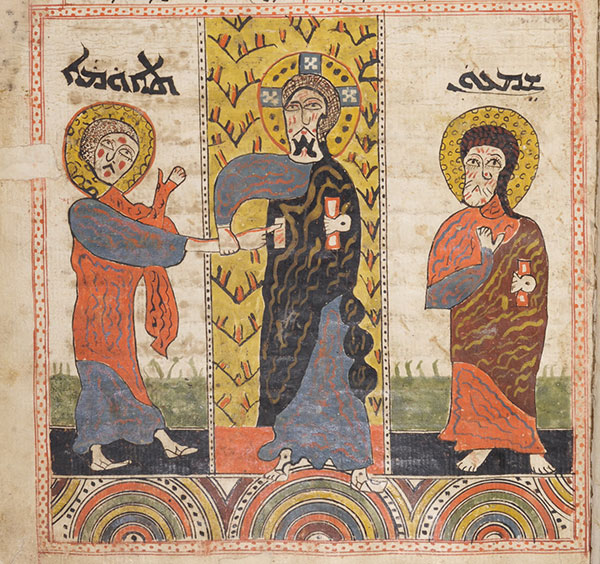 As of today, the project has digitized approximately 21,000 manuscripts from the Middle East, about 12,000 of which can be viewed online through the Hill Museum’s digital library, vHMML.  Father Stewart sees the online collection eventually growing to 100,000 manuscripts.

“So this, we hope, is going to launch a new era of Syriac scholarship, opening up these collections which were off the radar of Western scholars,” he said.

A Semitic language that was the Aramaic dialect of ancient Edessa, Syriac came to be an essential language for the transmission of writings throughout Mesopotamia and Asia, Father Stewart said. His team was able to digitize an invaluable 14th-century Syriac world chronicle, which contains an account of the Crusades from the perspective of indigenous Middle Eastern Christians.

However, the fate of the original manuscript is now less certain, as it had resided in Aleppo since 1923, when an entire Syriac Christian community from Edessa was forced to flee there with only their manuscripts and the key to their church.

“What’s the present state of the manuscript, its present location in Aleppo? Who knows,” said Father Stewart.

To raise awareness about the rich history of Syriac Christianity and the need for its safeguarding in the present, Fordham’s Orthodox Christian Studies Center has created the Syriac Studies Series, launched with Father Stewart’s lecture. The Department of Theology has also begun to feature Syriac studies in its curriculum.

The event was co-sponsored by the Fordham’s Orthodox Christian Studies Center, Graduate School of Arts and Sciences, and the Department of Theology.