The group’s last reading of the season featured poet Tyehimba Jess, who read from his second book Olio, which won the 2017 Pulitzer Prize in poetry. Also reading were three teen students who took part in Poets Out Loud’s high school outreach program. 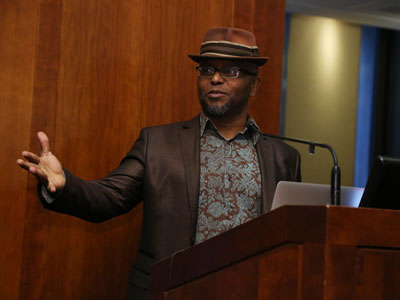 Jess—known for his poetry slam skills—read from his series of sonnets on conjoined twins who were born into slavery, made to perform in freak shows, and eventually earned enough money to buy the land where they had been slaves. (See him read from these sonnets at a Tedx talk.)

Heather Dubrow, Ph.D., Fordham’s John D. Boyd, S.J., Chair in the Poetic Imagination and director of the Poets Out Loud reading series, said having an accomplished poet like Jess was a great way to end the season.

“We were delighted to have Pulitzer Prize winners at both the beginning and the end of this year’s series,” she said, referring to poet Kay Ryan, who read in October.

“We like to represent poets at all stages of their careers, from emerging writers to very distinguished ones. It was wonderful to include Tyehimba Jess, not only because he is distinguished but because of what he offers in other ways. The poetry is splendid; it draws attention to many contemporary experiments with poetry and it engages with historical issues and some of the most shameful issues in our country’s history.”

Jess had a tough act to follow. Before he took the mic, the high school students got up to read their work, which dealt with issues both personal and global. Laurynn Laurore, an 11th-grade student from East Side Community High School, read her poem “Music”:

Laurore was joined by Alesha Alli, from Bronx Early College Academy, and Deliana Rosario, from the School for Excellence. 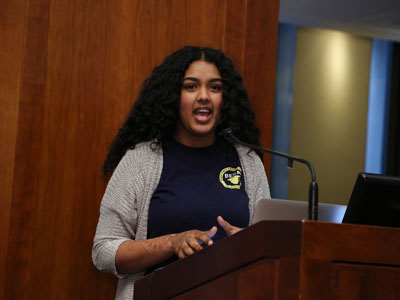 In a loud, strong voice, Alli read from her poem called “Perspective”: “We complain about the rain/and when our food is too plain/While there’s children in Africa/ suffering endless pain.” 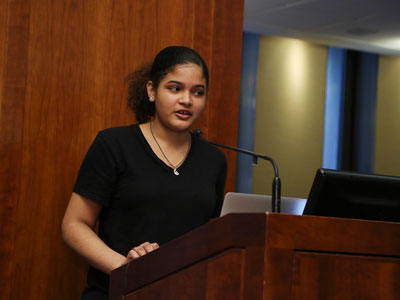 Rosario read softly from her poem, which focused on a relationship: “You’ll never know my story/because it’s never been told/Maybe it’s just toxic/the little hope that we hold.”

Poets Out Loud’s high school outreach program, started by Dubrow in 2009, aims to fosters an interest in reading, writing, and listening to poetry among high school students in underserved communities in the city.

Just before each event in the reading series, these students gather for a workshop—run by a Fordham graduate student—on the poets who are going to read. The poets themselves join for the final 10 minutes. Then the students join the audience for the reading.

Dubrow said that many audience members express how they never thought they were interested in poetry, but that their teachers encouraged them come to the event and that got them excited about future readings.

“The series is challenging and exciting because we bring poetry to so many people, both those who have long been seriously involved with it and those who, through the readings, realize how much it has to offer,” said Dubrow.