skip to main content
Return to Fordham University
You are at:Home»Arts and Culture»Panel Queries the Global Role in Congolese Conflict

Cell phones, computers, and electronics, the indispensable tools of modern life, don’t show any outward signs of the warzones that generate them. 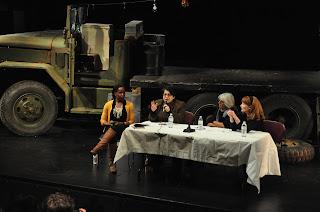 Yet the mineral used to manufacture these devices has contributed to years of war in the Congo, where conflict over natural resources continues to decimate the land as well as its citizens.

Helping to shed light on the issue, Fordham’s Theatre Program is running the 2009 Pulitzer Prize winner Ruined as the third show of its 2012-13 mainstage season. Written by Lynn Nottage, Ruined is the story of four women struggling to survive in war-torn Eastern Congo, a region rife with abuses of human rights, especially sexual violence.

On Feb. 22, a panel of Fordham professors gathered on the Pope Auditorium stage for a discussion on the complex issues raised by Nottage’s play.

With the militaristic set of Ruined providing a sinister backdrop for the panel, Cox explained that Eastern Congo provides 70 percent of the world’s supply of coltan, the mineral used in many electronic devices. The abundance of the mineral makes the Congo a magnet for civil conflict and corporate greed.

“In Ruined, we are compelled to question how a country that has been described as ‘the rape capital of the world’ becomes so through transnational capital flow and the exploitation of natural resources,” Cox said. “We are asked to consider how human life becomes devalued… [in part]through Western interest that believes that the right to trade is more powerful or valuable than the right to live.”

That capitalist mindset, Bush said, often pervades political discussion, seeps into media coverage, and then percolates down into public opinion. And though talk of independence from foreign oil has made headway in public discourse, the prospect of a similar outcome with coltan is dim.

“Coltan is the new oil,” Bush said. “It’s something that we’re building the entire infrastructure of our society around, so the stakes are incredibly high… And because of that, activism or movements in response are going to be very difficult.”

Meanwhile, as the war over resources drags on, civilians suffer. Hundreds of thousands of women have been caught up between warring factions since the conflict began in 1996. For Congolese women and girls of all ages, the threat of sexual violence is constant.

“In most wars, the rape of women is not for pleasure—it’s to punish the nation,” Sawalha said. “By contaminating the bodies of these women, the new generation that’s going to be produced because of it is contaminated as well.”

It leads us to ask why, in the face of overt violence, does the world not intervene, the panelists asked.

“We know an awful lot about what has happened and why,” Mustafa said. “But it continues. Nothing that we understand about this has stopped it from happening, even with the publicity, even with advocacy. It brings us back to the question of who benefits.

“You can pinpoint two culprits,” she continued. “One is the market as it functions right now, and the other is the ways in which patriarchy has become so horribly skewed in Africa.”

The panelists acknowledged that the evening’s discussions, as well as the play itself, do little to effect more than awareness and advocacy. Nevertheless, that is where justice must begin.

“It’s not about easy answers or coming to resolutions, but grappling with the various questions we find in the play,” Cox said.

On April 10 and 11, Ruined playwright Lynn Nottage will be visiting both the Lincoln Center and Rose Hill campuses to discuss her play.

For more information about Ruined and the Theatre Program’s mainstage season,read the article in Inside Fordham.