skip to main content
Return to Fordham University
You are at:Home»Arts and Culture»Panel Explores the New Normal for U.S.-Cuba Relations

“They’re going to put a U.S. embassy in Havana! In Havana!”

Sujatha Fernandes was on the subway when the announcement came that the United States and Cuba would be restoring full diplomatic relations after nearly 54 years. A scholar on Cuba, Fernandes was nonetheless shocked when the man seated next to her on the train began shouting the news.

Margaret Crahan, another renowned Cuba scholar, was at an academic conference in Havana when the news broke on Dec. 17. Crahan—as well as the 400 international researchers at the conference with her—were also caught off guard.

“We were struck dumb,” Crahan told a Fordham audience. “And then the room erupted as people cheered, cried, and hugged. We started asking ourselves, ‘How did this happen?’ And eventually, ‘What impact will this have?’”

On Feb. 26 a panel of Cuba scholars gathered at Fordham’s Lincoln Center campus to discuss the impact that the normalization of U.S.-Cuba relations will have on the empowerment of Cubans and on America’s relationship with the island.

The policy change is a paradigm shift, the panel said. Still, there are difficulties and copious details to iron out before the two countries reach a new “normal.”

For instance, Crahan said, Cuban President Raúl Castro has made several requests that will require significant negotiation between the two countries, including the return of the Guantánamo Bay naval base to Cuba, the end of Radio y Televisión Martí (a Miami-based broadcaster that transmits newscasts to Cuba), and compensation to the Cuban people for the “human and economic damages” caused by U.S. policies.

Nevertheless, slow progress has begun. Some restrictions have already been relaxed. For instance, all professionals and not just academics can now travel to Cuba for work or study purposes. Travel agencies and airlines no longer need to obtain special licenses, leading many to start looking into expanding flights to the island nation.

Ordinary tourism is still prohibited, however. “So don’t pack your bikinis just yet,” Crahan said.

Obejas said that one policy that has to be undone is the Cuban Adjustment Act—commonly known as “Wet Foot, Dry Foot” policy. Enacted in 1966, the law grants permanent residency to any Cuban immigrant who reaches American soil. 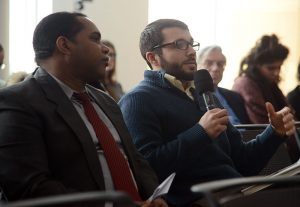 A student asks the panelists a question. To his left is a representative from the Cuba Mission to the United Nations, who attended the Feb. 26 panel.
Photo by Joanna Mercuri

“It would be impossible to normalize relations if you’re giving those who are dissatisfied with their situation in their home country the opportunity to come here no questions asked, no asylum petition—nothing except their physical presence on U.S. soil.”

The panel is a precursor to a Fordham undergraduate study tour of Havana that will be led over the spring break by Arnaldo Cruz-Malavé, PhD, professor of Spanish and comparative literature.

The course, Contemporary Cuban Culture, will explore the renewed importance of Havana as a vibrant contemporary cultural scene. Students will be exposed to the music, art, dance, literature, and film that have emerged amidst Cuba’s economic transition to a globalized world market.