skip to main content
Return to Fordham University
You are at:Home»Arts and Culture»Other Passions: Professor Fuses Literature, Psychoanalysis, and Art

(In a four-part series, Inside Fordham looks at the passions that drive some of Fordham’s faculty and staff to excel in fields beyond their areas of work, research, and scholarship.) 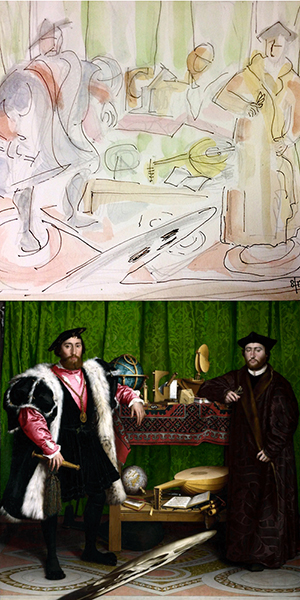 Hans Holbein’s painting, The Ambassadors, has been analyzed for its symbolism and visual narrative. It’s also been said that Henry James may have been influenced by the painting’s presence in London at the time he wrote his novel The Ambassadors. The connection may be tenuous, but some critics have made that argument—including Anne G. Hoffman, PhD, Professor of English and Comparative Literature.

That Hoffman could make an argument for James’s awareness of the painting should surprise no one. The James siblings have been the focus of her recent work: Henry the novelist, Alice the diarist, and William the philosopher/psychologist. Last winter The Psychoanalytic Review published her article, “Writing Siblings: Alice James and Her Brothers.”

What may surprise some is that Hoffman is an accomplished painter who also recently completed her own watercolor tribute to Holbein’s piece. The literary argument and the watercolor speak to just a few of her intellectual passions: painting, drawing, and literature.

Nowadays, Hoffman fuses those passions in a seemingly effortless manner. But she says it wasn’t always that way. Looking back from the present, she notes that at times of difficulty in writing, she would find herself turning to drawing. Only recently did she come to recognize that during times when the writing had stopped, the visual arts continued.

“Looking back, you can come to understand what’s happened in the past,” she said. “In fact, past difficulties can become the source of new insights and creative pathways.”

Hoffman has been drawing and painting her entire life, but she said she’s always made the more intellectual choices when it came to where to focus a career. More recently, she’s begun to think about the mingling of literary critic and painter, and opened yet another door in her intellectual life. 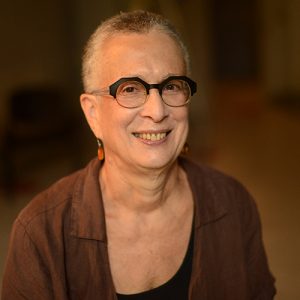 To separate Hoffman’s various spheres of interest would be an exercise in futility. In talking about her visual work, the disparate worlds appear to intersect and mesh. And on Wednesday, Sept. 30 at 4 p.m. in Walsh Library. she will present the comingling of those worlds in a talk titled “Words and Pictures, Bodies and Books.” 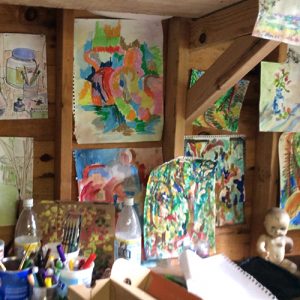 Hoffman’s art isn’t always representational, she says. Despite her overall interest in the human body—both in writing and in painting—her art is equally at home with the static still life. Sometimes, as in the case with the Holbein homage, the figures are obvious, at other times she veers toward abstraction.

But to look for a clear literary narrative or theory in any of Hoffman’s images would be beside the point, particularly when it comes to the human figure. Beneath it all, she said, is an interest in psychoanalysis and a belief that subjectivity begins to take shape in the earliest stages of life. Such subject matter can’t be represented in any literal manner, she said, and is not done so in her art, where her use of texture, color, and movement dominate.

“As an artist, I recognize that the infantile body—an intense domain of sensation, perception, and fantasy—is a reservoir and a resource for creative life,” she said. “Outside of conscious awareness, our early years provide the grounding for later experiences.” 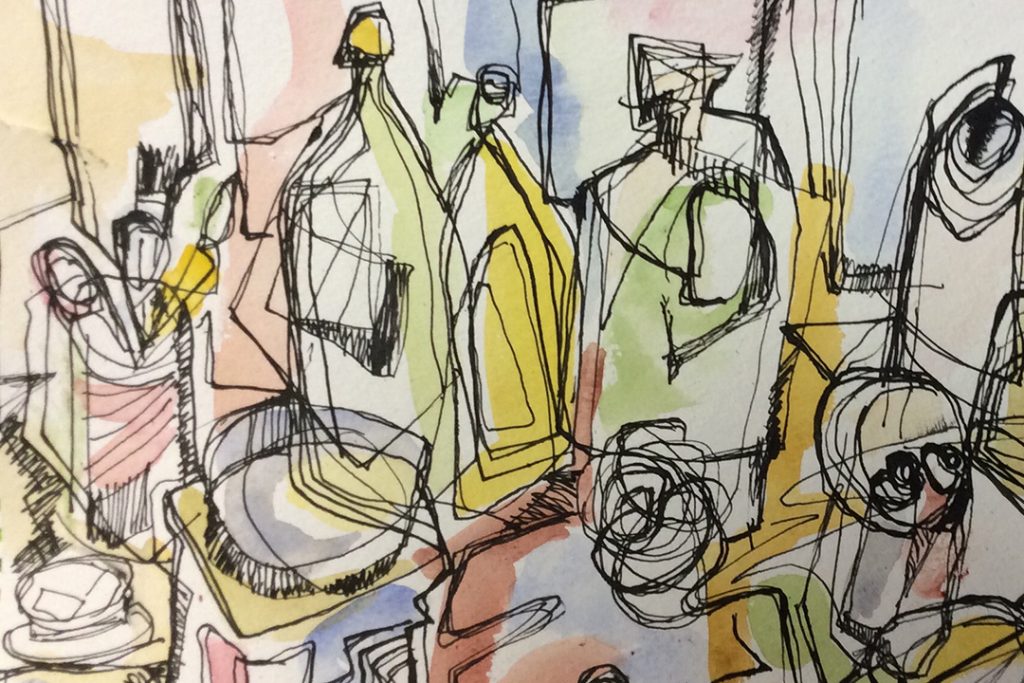