skip to main content
Return to Fordham University
You are at:Home»Arts and Culture»Other Passions: Graphic Artist Creates a World of “What Ifs” in Film

(In a four-part series, Inside Fordham looks at the passions that drive some of Fordham’s faculty and staff to excel in fields beyond their areas of work, research, and scholarship.)

In 2009, Bradley Cooper, Ed Helms, and Zach Galifianakis starred in the wildly successful comedy The Hangover, which followed the aftermath of a Las Vegas bachelor party gone horribly wrong. 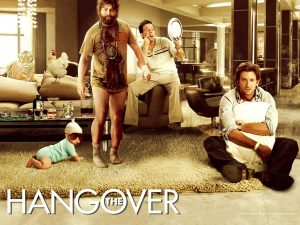 But if an alternate-universe theory is to be believed, the iconic trio of Dean Martin, Jack Lemmon, and Jerry Lewis might have starred in the movie instead—some 60 years ago. 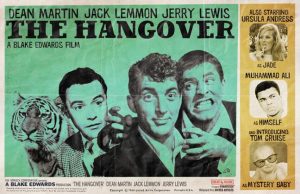 These are the colliding universes created by Peter Stults, associate director of the Fordham Fund in the Office of Development and University Relations. Stults has turned his fascination with film, graphic arts, and nostalgia into a successful niche business revolving around imagined retro movie posters.

“It’s a fun little formula where you take a contemporary movie like Inception and you ask, ‘What if this movie were made in the 1940s? Who would have directed the movie, who would be in the cast? What actor would be the equivalent of today’s Leonardo DiCaprio?’” he said.

Stults’ talent for creating fake yet seemingly plausible movie posters was first discovered by business insiders in 2012, when he shared his first posters on behance.net, a social media site for artists and designers. Re-imagined posters featuring James Dean in Drive and Sean Connery in The Fifth Element struck a chord. The news sites Buzzfeed, Gizmodo, The Daily Mail, Fast Company, and The Huffington Post wrote about Stults’ work, and he was invited to display his posters in Collette, a clothing boutique in Paris. 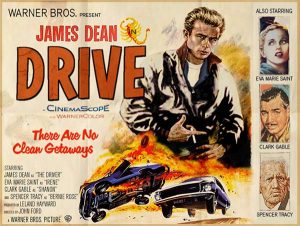 He has since been commissioned to do illustrations for Time Out magazine and Paul Schrader’s film The Canyons. Once a month for the last three years, the French magazine So Film has published his alternate take on a movie that is premiering.

One of the foundations that inspired Stults’ creation of his “What If” series was his discovery of “cast-aways” that included Jack Nicholson. (He was was originally cast as the dad in A Christmas Story, but replaced) and Sylvester Stallone (he was up for the role of Superman before Marlon Brando put the kibosh on it.) The other was his interest in retro design.

“There are so many facets of retro design, like art deco, pulp covers, rock posters, and even World War II posters. To me it was a form of art history that nobody talks about – the aesthetic of retro/vintage designs.”

SciFi films are the most popular, he says, because they lend themselves to more creativity and fantasy—whereas movies based on true stories are next to impossible to replicate. He gave The Social Network and American Sniper as examples of films that are too closely linked to one era to translate into another one.

What resonates in Stults’ artwork, he says, is the way the images can both disrupt and intrigue the viewer. Seeing a poster profile of Leonard Nimoy (cast as John McClane instead of Bruce Willis) shot against the exploding high rise in Die Hard “makes one do a double-take.”

“Once you’ve seen it, then you ponder…. Could he be an action star? Is it possible?” 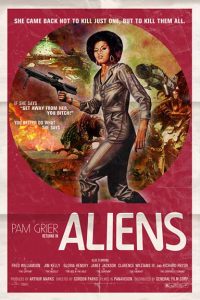 And although film purists occasionally kvetch about his casting choices, sometimes he manages to actually convince people the posters are real.

“I did a poster for Jurassic Park and when it surfaced, people said ‘I had no idea Cary Grant did a Jurassic Park!’  I did one with Pam Grier starring in Aliens, and a guy popped up on Tumblr and wrote, ‘Ok guys, I’ve gone on IMDB and I cannot find this movie,’” he said.

“It’s fun when I’ve straight-up convinced people these are authentic,” he said.