skip to main content
Return to Fordham University
You are at:Home»Arts and Culture»Orthodox Christianity Lecture Touts Rising Appreciation of Byzantine Art
Helen Evans took audiences on a guided tour of Byzantine art as it’s been formally presented in exhibitions dating back to 1851.

Photos by Dana MaxsonThe art of the Byzantine Empire has been formally displayed in exhibitions for fewer than 175 years, but the progress that has been made in that time toward recognizing it as a distinct, powerful movement has been miraculous, an art scholar told an audience at Fordham on Oct. 23.

“Due to the efforts of many over the last decades, including the Metropolitan Museum of Art, Byzantium is now more readily recognized and its culture more often understood as an active power in the world,” she said. 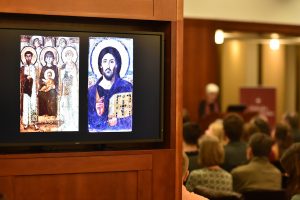 Evans said that while exhibitions in the past might have presented Byzantium art as a link between Classical and Gothic styles of art, today it is widely accepted as respectable in its own right, and believed to be from multiple origins.

“Presenting Byzantium in the Modern World” was presented by Helen C. Evans, Ph.D., the Mary and Michael Jaharis Curator of Byzantine Art at the Metropolitan Museum of Art. Her lecture was sponsored by Fordham’s Orthodox Christian Studies Center as its annual Orthodoxy in America lecture.

Byzantium, which became known as Constantinople and later Istanbul, was the capital city of the Byzantine Empire, a continuation of the Roman Empire in its eastern provinces, from roughly 330-1453 A.D.

A member of the Met staff since 1991, Evans has overseen the acquisition, study, and interpretation of the museum’s collection of early Christian, early Jewish, and early-to-late East Christian and Byzantine art.

She curated three exhibitions there, “The Glory of Byzantium,” in 1997, “Byzantium: Faith and Power,” in 2004, and “Byzantium and Islam,” in 2012. While exhibitions in the past might have presented Byzantium art as a link between Classical and Gothic styles of art, today it is widely accepted as respectable in its own right, and believed to be from multiple origins.

Evans said she was proud that “The Glory of Byzantium,” which featured 344 objects from 24 countries, was the first exhibit on Byzantine art at the Met since 1977, and played a major role in this change.

“‘The Glory of Byzantium, 843-1261’ grew out of my dissertation research on the middle Byzantine period and my interest in the character of the art of the center, and its interaction with the periphery, as well as my desire to demonstrate that multiple centers [within the empire]produced significant art, not just Constantinople,” she said.

“In all these earlier exhibitions, anything that was really outstanding almost invariably was called a work from Constantinople.”

The idea that Byzantium is more important as a conduit than as a statement of its own culture has had its roots in the beginning of academic studies, she said. It’s integral to the English historian Edward Gibbon’s 1776 tome, The History of the Decline and Fall of the Roman Empire, which is still influential today. 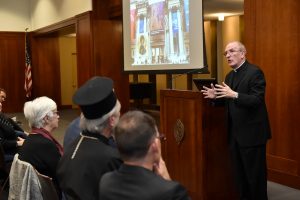 “I would argue his generation’s approach to the empire and its periphery long dominated, and still influences, our approach to Byzantine art,” she said.

The first art exhibit dedicated to Byzantium, which was held at the Crystal Palace in London in 1851, set the tone, she said, as a critic wrote afterwards that the pieces were “a means by which Roman architecture, which was itself an offspring of Greece, was transformed into the Byzantine style while in turn, it resolved itself into two remarkable phases, in the Lombard and Norman style.”

As time went on, exhibitions such as one staged in Rome in 1905 focused on the art in the context of the priorities of the countries of origin. The objects selected for the show were originally from countries as varied as Egypt and Russia, but they came from collections owned by the Vatican and others in Italy.

“So, the icon section of the catalogue offered an introduction as to why the viewer should be interested in icons. Because they influenced Italian art,” she said.

A big change came in 1964, when 740 items from 18 countries were brought together in Athens for a show called “Byzantine Art: A European Art.” The curator of that show said “it can be clearly perceived that Byzantine art is European, and the only art between East and West which kept alive that spirit of Greek humanism, now recognized as preeminently the basis of European values.” 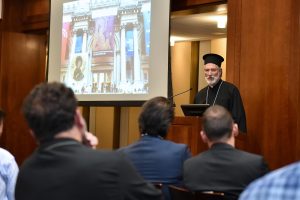 The Right Reverend Irinej, Bishop of the Serbian Orthodox Diocese of Eastern America, offered the benediction at the end of the evening.

Looking to the future, Evans was encouraged by the reception of “The Glory of Byzantium,” which drew an estimated 400,000 visitors. In that show, she noted that she and her colleagues presented the objects as often as possible using the terms of the Orthodox word: “icon,” for instance, instead of “painting.”

“We sought to view the world as if we were standing in Constantinople, not Paris, or London or Berlin. It is a subtle issue, but one that I think added immensely to the sense of being in the empire as one passed through the exhibition, or read the catalogue,” she said.

“One of the side effects was, suddenly newsmakers used the word Byzantine in a more positive context in the United States.”

“In the future, more exhibitions could explore more contacts between Byzantium and others states on its periphery and beyond to demonstrate the active engagement of the empire as a vibrant force of cultural change in its own time, not a static anchor to the past,” she said.

“By doing this, future exhibitions can continue the reversal of the image of Byzantium as a static entity in which people are not really thinking, they’re simply repeating what they’ve known from very distant ages.”

In his remarks afterward, Joseph M. McShane, S.J., president of Fordham, said Evans’ talk was proof of how the Byzantines, were bridge builders between civilizations.

“I came away from this evening with a greater understanding of what a bridge role Byzantium played in the life of the intellectual, artistic, and spiritual life of all of Europe and really now, the new world,” he said. “So I want to thank you Helen. It was a great joy.” 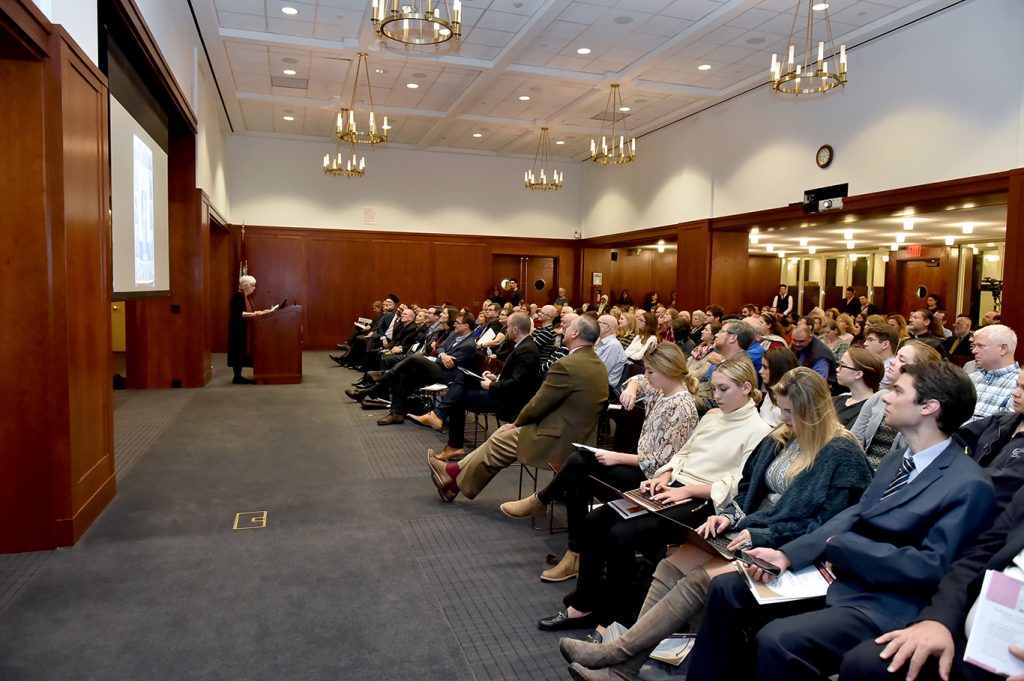