skip to main content
Return to Fordham University
You are at:Home»Arts and Culture»Once Upon a Midnight Dreary… 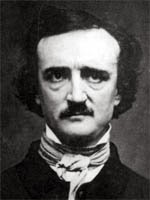 In 1846, Fordham gained a thoughtful, well-mannered neighbor who would become a regular visitor to the Jesuit fathers on campus. In June of that year, he moved into a white three-room cottage on Kingsbridge Road, overlooking the campus of Fordham (then named St. John’s College).

When his wife died seven months later, he began the long walks that would lead him to the campus of St. John’s. There, he befriended college president Auguste J. Thebaud, S.J., as well as future president Edward Doucet, S.J., with whom he often walked the campus grounds, unburdening himself and taking a break from his literary efforts.

The Jesuits often gave him free rein in their library, where he would stay late into the night. “He was well informed on all matters” and was “a gentleman by nature and instinct,” Doucet said of the man, who had the now-familiar name of Edgar Allan Poe.

The Edgar Allan Poe cottage on Kingsbridge Road in the Bronx.