Actors, directors, playwrights, and other stakeholders in the theater community gathered at Fordham on Feb. 13 to discuss the startling reality behind the representation of minority actors on New York City stages. 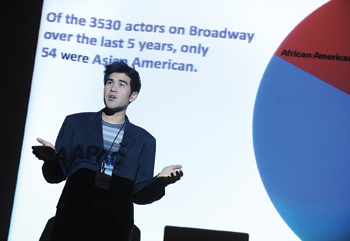 More than 400 people gathered in the Pope Auditorium for the roundtable discussion, “RepresentAsian: The Changing Face of New York Theatre,” presented by the Asian American Performers Action Committee (AAPAC) and the Fordham University Theatre Program.

The AAPAC report on minority casting in the last five Broadway seasons showed that African-American actors were cast in 13.2 percent of all available roles; Latinos in 3.5 percent; and Asian Americans in 2.3 percent.

“In the industry as a whole, actors of color are only 20 percent of the actors employed in the last five years,” said actor and AAPAC member Pun Bandhu. “It’s about access, it’s about making sure that the most qualified actor gets the role, regardless of race.”

While the numbers are clear, their meaning is decidedly less so, Bandhu said.

That is because there is no lone offender, the panelists concluded. Playwrights who draw inspiration from their own families and friends tend toward actors who look like those families and friends; agents often book actors with the best training available; and industry members of all kinds use race to portray “realistic” situations within the theater.

“There are still directors who stop cold at the idea of members of a biological family group being of different races,” said Public Theatre artistic director Oskar Eustis. “They’re not trying to be close-minded. [But] for them, race is such a central category that when they see a black parent and white child, it doesn’t feel real to them.

Although minority actors are underrepresented, a conversation about inclusion has, at the very least, begun, the panel agreed.

“This community has become so galvanized in a positive and proactive way, and we hope that it’s just the beginning of conversations that we can continue to have with each other as collaborators,” said actor and playwright Christine Toy Johnson.