skip to main content
Return to Fordham University
You are at:Home»Arts and Culture»New York City Ballet Master Gets Extra Credit

When Jonathan Stafford left the New York City Ballet (NYCB) as a principal dancer last spring, The New York Times called him “among the most discreet, unshowy of dancers: a true but self-effacing gentleman.”

Walking across Lincoln Center Plaza, nothing about Stafford’s demeanor reveals his star credentials—one could easily mistake him for a student.

But then, he is a student.

With 75 credits under his belt, Stafford hopes to graduate from the School of Professional and Continuing Studies in the next couple of years with a major in Organizational Leadership.

“You really get a sense that being at Fordham is an extension of Lincoln Center. I mean, when you’re in the classrooms you can see Lincoln Center,” he said. “It really needs to be the official school of the New York City Ballet.”

Stafford began dancing in Pennsylvania when he was 8 years old after seeing a male dancer “flying around the stage” at his little sister’s dance performance. He would soon fly through the ranks at School of American Ballet and the NYCB corps shortly thereafter.

Yet even with his swift rise, he said his parents almost immediately encouraged him to take college courses, just in case.

Stafford began taking classes in 1999 after knee surgery. He took a few online courses until his girlfriend (now his wife, NYCB principal ballerina Brittany Pollack,) suggested that he take classes at Fordham. Pollack whipped through her own course load in just six years, graduating in 2013. She is now pursuing her master’s while continuing to dance—a first for the NYCB. 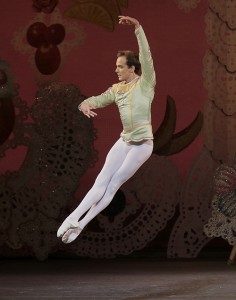 Stafford in “George Balanchines’ The Nutcracker” (Photo by Paul Kolnik)

“Back then not many people in the company took classes at Fordham. It’s much more prevalent now, which I think is great,” he said.

Stafford said he wishes he had started classes sooner, something he encourages other dancers to do.

“Going to Fordham has become the kind of thing the older dancers encourage the younger groups to do, and it has snowballed a little bit as those youngers encourage even younger dancers,” he said.

Fordham professors appreciate the arts and respect the dancers for their discipline, he said. The dancers often take classes together and study together during rehearsal when it’s not their time to dance. With a schedule that sometimes runs from 10 in the morning to 10 at night, the classes also provide a much-needed outlet.

“Using your brain in a completely different way can be really refreshing,” he said. “You can have a rough day dancing and your body doesn’t feel great, but then you have to do an assignment and by the end of the hour you feel better.”

Stafford used his assignments as an opportunity to learn more about the ballet’s administration level, which he is now a part of as the company’s new ballet master.

“I feel I’m a much better writer. I’ve had to write to major donors and I feel a lot more comfortable approaching them with an advanced education under my belt,” he said. “For some of my school projects I’ve interviewed board members who are senior vice presidents or CEOs of major corporations. It was fun to then bring that information back to the classes at Fordham.”

The dancers receive some support from a NYCB college fund, plus Fordham offers a “Dancers Discount” that has also helped pare down the costs. But Stafford said that it was the ability of PCS to accommodate the dancers’ hectic schedule that has made getting a degree possible.

“PCS is amazing. They find ways to work in all these classes each semester that we need to take and yet fit around our schedule. It’s really been a life saver all of us at City Ballet.”