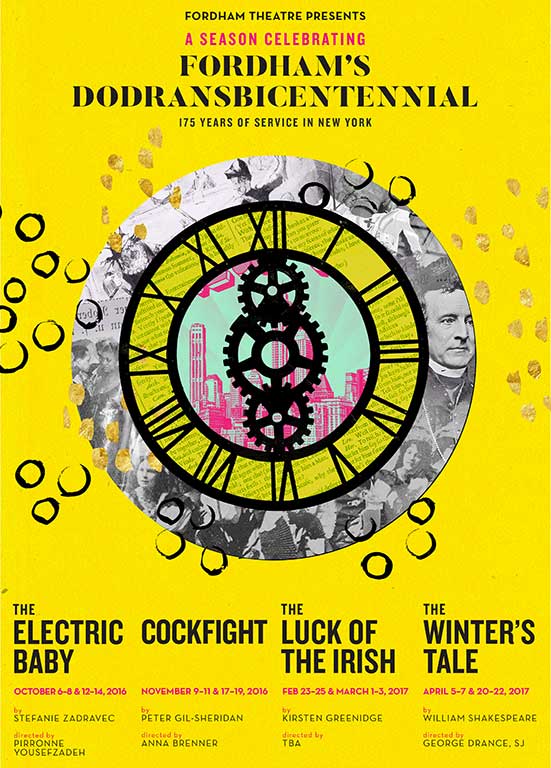 In the pantheon of New York City institutions, Fordham is as ingrained in the city’s fabric as the Metropolitan Museum of Art and fellow Bronxites the New York Yankees.

It wasn’t always so, though. When Archbishop John Hughes founded what was then St. John’s College in 1941, the school was a haven of sorts in a city that was hostile to Irish immigrants, like him.

This year, in honor of the University’s Dodransbicentennial celebration, Fordham Theatre will perform four plays on its main stage that feature characters who, like Archbishop Hughes, cope with displacement—by creating their own reality.

The four plays that will be staged at Pope Auditorium are:

Theatre program director Matthew Maguire said that the four plays share a comic sensibility; this year, there are no tragedies in the repertoire.

“Since it’s Fordham’s celebratory year, we wanted to celebrate with comedy, but comedy with teeth, and comedy that would be meaningful,” he said.

As is custom, students played a large part in the selections, which were discussed at five forums last year. Maguire noted that Electric Baby was brought to his attention by a student who’d seen it performed at the Two River Theater in New Jersey. The play is about a Nigerian and a Romanian immigrant who shape the lives of the Americans around them.

In Cockfight, a character is displaced both in the literal sense, having fled from Cuba, and in the emotional sense as well, as a gay boy trying to come out in a world dominated by his father’s machismo.

Luck of the Irish is the story of a black family who moves into a white neighborhood through an arrangement with an Irish-American ghost-buyer. They, too, are both literally and emotionally displaced, because they are made to feel that they don’t belong.

And in the classic The Winter’s Tale, Hermione is driven from her home by her husband’s insane jealousy, and Perdita, their daughter, is abandoned in a foreign land at birth.

In addition to striving to bring quality roles to students, Maguire said he also strives to stage plays whose creators are available to collaborate. This season, playwrights Peter Gil-Sheridan and Stefanie Zadravec will be present for rehearsals. As a graduate of Fordham’s theatre program, Gil-Sheridan, who now heads the MFA Playwriting Program at Indiana University, is a true success story, said Maguire.

“Their presence influences the way our students are going to get work down the road, because they’ve been in the room with these working artists. They may think a good role is John Proctor in The Crucible, and of course it is, but for an actor, it’s even better if you get to step into a role for the first time with the playwright,” he said.

“A good role is one where you can change people’s lives. Social justice is what this school is all about, and so our season emanates a sense of social justice.”