skip to main content
Return to Fordham University
You are at:Home»Arts and Culture»New Theater Season Shines Spotlight on Issues of the Day

Fordham Theatre’s 2019-2020 mainstage season, which opens on Oct. 3 with Sarah DeLappe’s The Wolves, features no official title that might neatly bundle the quartet of plays together under one theme.

Look a little closer though, and it’s possible to see in the season, which also features productions of Shakespeare’s Twelfth Night, Airline Highway by Lisa D’Amour, and To The Bone by Lisa Ramirez, the ideas percolating through the atmosphere of these United States, circa 2019. 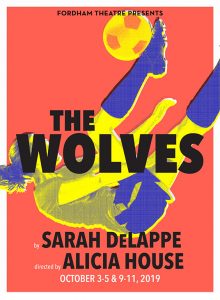 “[Students] are going to tackle all sorts of issues. Some are old, some are new, but they still pertain to what’s going on today,” said Stefanie Bubnis, the program’s interim managing director, who noted that every play features a large cast of lead characters. “It’s all about unity, working together, and symbiotic relationships.”

The season opens with The Wolves, an all-female ensemble play that debuted off-Broadway in 2016 and was a finalist a year later for a Pulitzer for drama. Set in an indoor soccer facility, it depicts nine teenage girls warming up for a game. Through their conversations, ideas emerge about personal and global events, raw and open wounds, and the struggle to rise above the pressures put upon them by men, coaches, peers, and society. To prepare for their roles, the cast has been meeting on a regular basis with Fordham’s own women’s soccer team. 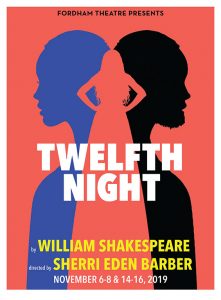 Twelfth Night, or What You Will, which opens Nov. 6 and is considered to be one of the Bard’s funniest plays, was written 416 years ago, but it touches on some of the same issues of gender identity being debated today. In fact, when it was first staged, the character of Viola, who disguises herself as a boy and assumes the name Cesario, was played by a male actor.

In the spring, the program will break new ground when it comes to gender roles with the presentation of Airline Highway. Set at the Hummingbird Motel on the outskirts of New Orleans, the dark comedy features a group of outcasts who are throwing a funeral party for Miss Ruby, an 85-year-old former stripper who isn’t dead yet. 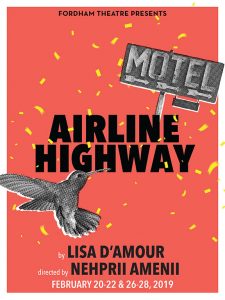 One of the lead characters is transgender, and if the right person is not found within the Fordham community, the casting will be opened up to the public, which would be a first for the theater program.

The final play, To The Bone, touches on the issue of immigration, as it focuses on undocumented workers who labor in a poultry factory in upstate New York.

The season’s plays were chosen in consultation with students in the theater program. Olivia Spenard, a junior at Fordham College at Lincoln Center who nominated The Wolves, saw it when it was staged in 2017 at the Lincoln Center Theater, and chose it in part because it presents a rare portrait of women who draw strength through sports. She noted that Sarah DeLappe, the playwright, has compared the characters to warriors. 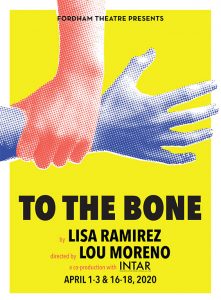 “So often, young women have roles that are much smaller in plays, or are some sort of stereotype or aggrandized characteristic of what a young woman should be. But The Wolves very unapologetically looks at what it means to be a young woman today and is an incredible ensemble play,” Spenard said.

“Their conversations are that of a girl growing up and coming into womanhood, whether she’s ready to or not.”

The Wolves, by Sarah DeLappe, directed by Alicia House

To the Bone by Lisa Ramirez, directed by Lou Moreno, Artistic Director of INTAR