skip to main content
Return to Fordham University
You are at:Home»Arts and Culture»New Theater Season Probes Questions of American Identity 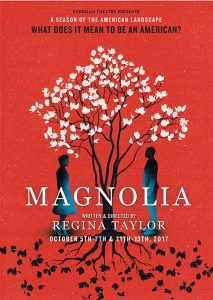 The debate about what it means to be citizen of this country has always been fraught with tension.

National acrimony was evident during and after the 2016 presidential election, and it became even more apparent after white supremacists and neo-Nazis staged a rally in Charlottesville, Virginia this summer, said Fordham Theatre’s director Matthew Maguire. President Trump’s casting of blame on “both sides” for the Charlottesville violence may have made it tempting for many to dismiss Trump supporters, but Maguire feels conversations should continue.

Fordham Theatre’s mainstage season, What Does It Mean to Be an American?, is meant to be a nudge in that direction.

“In his farewell address, Barack Obama said ‘If we want change, we have to go the long route, which is to talk to each other,’” Maguire said. 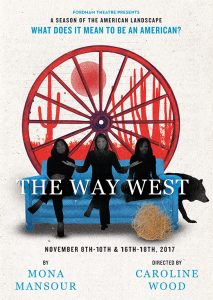 Poster for The Way West

“I hope audiences come away from these plays feeling that they want to pick up the mantle and engage with others who they might otherwise be tempted to shut out.”

The Way West, by Mona Mansour, directed by Caroline Wood;

Magnolia, an adaptation of Anton Chekhov’s Cherry Orchard set in Atlanta in 1962, touches on issues of both race and class, and features a newly elected mayor who has overseen the construction of a wall between a black and a white neighborhood. 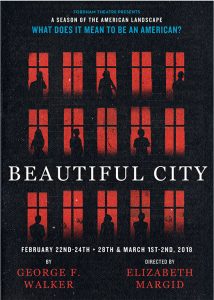 The Way West revolves around a family matriarch who is an absolute believer in the pioneer spirit of the country, and who maintains a steadfast faith in self-reliance even as her world disintegrates. Maguire said the character will resonate with those who don’t believe the country needs a social safety net.

“Self-reliance is one of the founding myths of our culture. There are plenty of places in the United States at the moment that are still fueled by the nostalgic myth,” he said.

“Is the America that we once knew ever going to come back? And how do we reinvent ourselves? This is play that might get people from two sides talking to each other, because there is a spirit in it that’s indefatigable.” 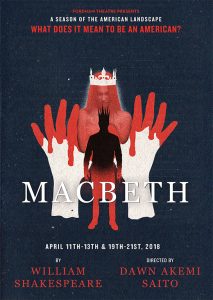 The spring semester will kick off with Beautiful City, which follows the story of a rapacious landlord trying to take over a whole neighborhood, and the people who, in their fight to stop him, enlist the help of a woman who has magical powers. Befitting its tradition of performing at least one play that is a classic, the season will conclude with Macbeth, whose focus on the abuse of power speaks for itself, Maguire said.

“What does it mean to be an American? Is there an allegiance to a wider abstract? If you’re an oil worker in the bayou, a lobsterman in Boston, a Cajun, a Wasp, or if you’re Thurgood Marshall, what’s the commonality? What makes an American? It’s not so simple to say an allegiance to the Constitution, because that’s too abstract,” he said.

“Plays should be able to change people’s lives, so that when they leave, they see the world differently, and they decide to do something. These plays do that—and are all enormously entertaining as well.”