skip to main content
Return to Fordham University
You are at:Home»Arts and Culture»New IIHA Photo Gallery Brings Humanity Into Focus
Photos courtesy Fernando Brito. Above: Dia de Jesús Malverde, 2013
In what was once a dark, carpeted room filled with books from Fordham University Press, there is now a sparse white gallery filled with photography as rich in ideas and narrative as the texts that once occupied the space. While the room may have changed, an atmosphere of ideas has remained.

Brendan Cahill in the Canisius Gallery (Photo by Tom Stoelker)

In 2017, the Press relocated downtown to the Lincoln Center campus, closer to the publishing community. It moved into the space once occupied by Fordham’s International Institute of Humanitarian Affairs (IIHA), which in turn took over the Press’s quirky abode, Canisius Hall, just outside the gate of Fordham’s Rose Hill campus. Both parties say the swap was a perfect exchange.

Canisius Hall is akin to a renovated walkup apartment building whose windows overlook Clavius Way. The IIHA gained conference rooms and offices where international conference calls from trouble spots around the globe can be fielded and then discussed in an academic setting. Much of the building’s serene vibe is offset by the very serious nature of the crises in the communities IIHA serves.

In the new Canisius Gallery, opened in September 2017, images of refugees from a past art show that hang in the hallways, as well as the images from the current show, stand in stark contrast to bucolic Rose Hill. And that’s pretty much the point, said Brendan Cahill, executive director of IIHA.

“My hope for this gallery really is to challenge the Fordham community, the Bronx community, and the New York Community to engage with international humanitarian and social justice issues,” he said.

He said the small space can comfortably display about two dozen photographs. The idea is not to have large shows, but to hold small, high-quality photography exhibits with a focus specific enough that the shows won’t be dissolved into New York’s huge photography scene. Only two or three shows will be held a year.

Cahill has reached out to Fordham’s photographers, Joe Lawton, associate professor, and Stephen Apicella-Hitchcock, artist in residence, in the Department of Visual Arts. With their input, IIHA mounted shows that were documentary in nature yet diverse in style.

The gallery’s Spring 2018 show focused on the sex trafficking crisis by showing the work of photojournalist Robert Nickelsberg. Cahill said Nickelsberg took a holistic approach that included images of the clients, the judges, the police, and the people that were trafficked. That particular show culminated with programming that included a panel discussion featuring speakers from the New York Police Department, various NGOs, and activists.

The show features images from the photographer Fernando Brito’s home state of Sinaloa in Mexico, an area known more by outsiders for its drug cartels than for Jesús Malverde, a 19th-century Robin Hood character who purportedly stole from the rich and gave to the area’s indigenous poor. While Malverde was never made a saint by the Catholic Church, the residents of Sinaloa hold a large festival celebrating his memory on May 3 of each year. 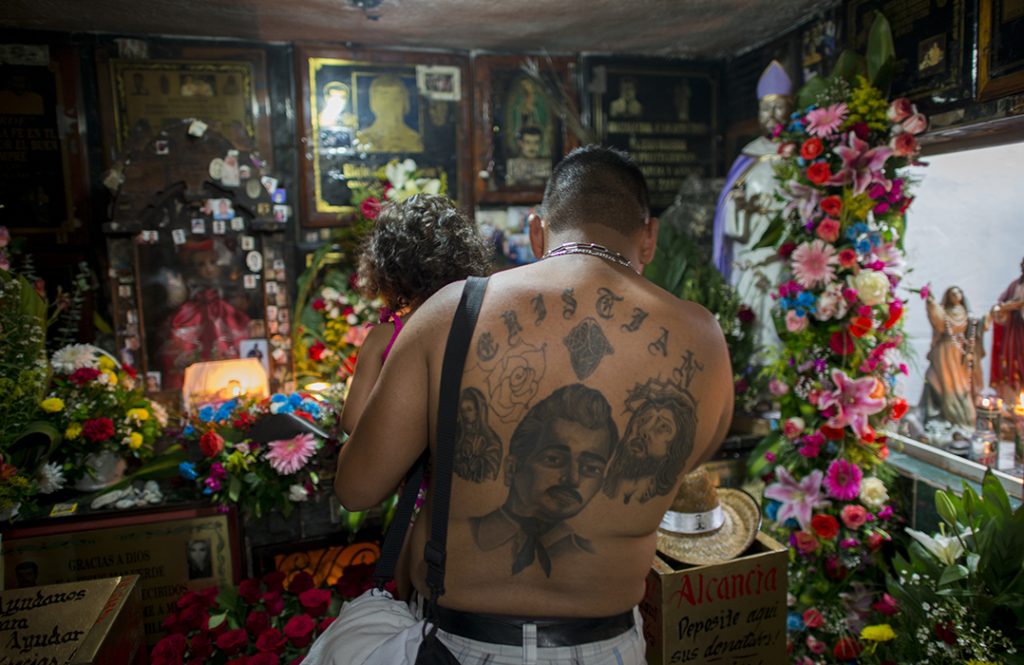 Framed by the media as a celebration for narcos, people involved in the illegal drug trade, the festival through Brito’s lens becomes an homage to the hard-working people of his home state. That’s not to say that Brito turns a blind eye to the violence and horrors that the drug cartels bring to the region; One photo depicts a man shot dead on the street with the skull of a cow placed atop his head and a grapefruit on his stomach in a vulgar appropriation of spiritual imagery.

But it’s the images of the area’s residents that occupy a bulk of the show and the lion’s share of Brito’s attention. Images of baptisms, veneration of the Virgin Mary, women at prayer, and the slaughtering of cows bring daily life to the forefront, usurping the violence. A series of straightforward portraits of townspeople posing in front of the altar at their local church looking straight into the camera anchors the show in humanity.

Cahill said that the current political demonization of the people of Mexico is an effort to desensitize U.S. citizens of their humanity. He noted that images of the people in the photos are not those of refugees trying to gain access to the U.S., but of ordinary citizens at home in Mexico. He said this show speaks to the overall mission of IIHA in “that images, that art, and that culture are a part of a celebration of the diversity of life.”

“Very often in the [humanitarian]aid world there’s a power imbalance of those who are vulnerable and those who are trying to give assistance,” he said. “Often, you lose sight that the person who is waiting to be clothed, to be housed, to be fed, was once a teacher, or was a physician. But they can just look like someone with outstretched hands. We always need to be reminded of that humanity in who we’re trying to help, because one day that could be us.”

The show runs through Feb. 28, when it will be sent on loan for an exhibition at Yale University. The gallery’s next show will feature Syrian photojournalist Bassam Khabieh in an exhibition on loan from Colby College in Waterville, Maine.