skip to main content
Return to Fordham University
You are at:Home»Arts and Culture»New Book Takes Issue with Conquistadors’ Version of the Fall of the Aztecs

The ancient Aztec city Tenochtitlan was a thriving metropolis during the 16th century. With a city population of 150,000 and another 350,000 living in the surrounding urban network, Tenochtitlan was more than double the size of Rome, Paris, and London at the time.

However, in 1521 the Spanish conquistadors arrived, bringing with them foreign diseases and advanced weaponry, and the city succumbed. A letter from Hernán Cortés, who led the expedition through Mexico, to King Charles V of Spain reports that Tenochtitlan had fallen and that his army had “destroyed and razed it to the ground.”

There is one problem with Cortés’ account, though, says Barbara Mundy, PhD: it isn’t true.

Mundy, a professor of art history who specializes in pre-Columbian America, takes Cortés to task in a new book released this summer, The Death of Aztec Tenochtitlan, the Life of Mexico City (University of Texas Press, 2015). In it, Mundy argues that the fall of the mighty Aztec empire was not a clear-cut victory for Spain. Tenochtitlan was not utterly destroyed by the conquistadors. Moreover, it remained a distinctly Amerindian city ruled by Aztec elites decades after the Spanish invasion. 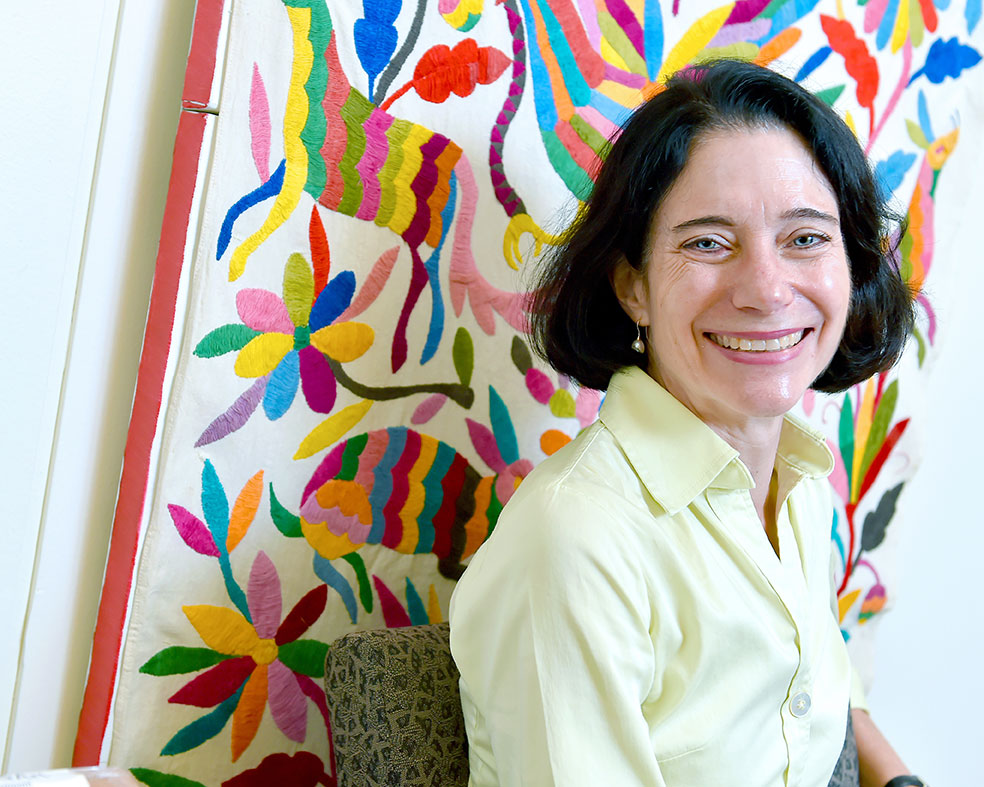 “The Spaniards presented themselves as totally self-sufficient and in charge once they conquered Tenochtitlan, but it wasn’t like that,” said Mundy, who is the co-creator of the NEH-funded website Vistas, a digital collection of visual culture in Spanish America, and a fellow at the National Gallery of Art in Washington, DC.

“There were 300 Spaniards and all around them were tens of thousands of conquered natives. So there was a delicate balance to maintain.”

The balance that was created, said Mundy, was more of a “working relationship” in which the native elite was given just enough power to keep the city running. The Spaniards still depended heavily on the Aztecs to maintain functionality.

Mundy first noticed this historical discrepancy while perusing ancient Aztec texts (she has studied the Aztec language of Náhuatl). Although the famed Tenochtitlan king Moctezuma was killed during the conquest, his reign did not end with his death, Mundy said. His descendants ruled for decades afterward, keeping the Aztecs squarely in power.

“Part of the reason they were so powerful was because they controlled the labor. When you needed 60,000 workers to do something, the Spanish viceroy couldn’t just clap his hand and make it happen—but the Aztec overlord could,” Mundy said.

The ecological genius of Tenochtitlan

Unlike the invading Spaniards, the Aztecs, who called themselves the Mexica (pronounced meh-SHEE-kah), were also master urbanists in an ecologically difficult region. Built on an island in the middle of a saltwater lake, Tenochtitlan drew its potable water from a system of dikes the Mexica built to collect and preserve fresh water that flowed in from the West. These dikes also helped during the rainy seasons, when Tenochtitlan was prone to flooding.

The city included a network of canals and aqueducts to irrigate massive chinampas (floating gardens) that the Mexica cultivated and to dispose of waste in order to curb the spread of water-born diseases such as cholera.

“The Mexica had very sophisticated knowledge of their environment,” Mundy said. “They offer a positive model for us today as we deal with drought and climate change. I think we can take some lessons from the Mexica about how to better cohabitate with Mother Earth and live in our world in a less destructive way.” 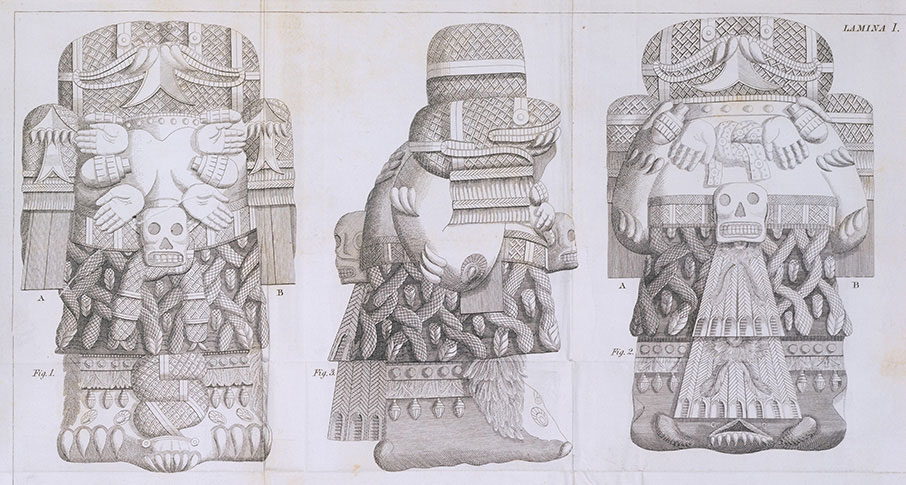 A depiction of a stone sculpture of the Aztec god Coatlicue, which was discovered in Mexico City’s main plaza in 1792.
Photo courtesy of Vistas: Visual Culture in Spanish America

A confluence of histories

The Death of Aztec Tenochtitlan also describes the Mexica’s brutality—they are infamous for offering human sacrifices to their gods. And yet, Mundy points out in her book, this style of warfare—albeit brutal—was far nobler than that of their European counterparts.

“Mexica warfare was fought among men as a valiant exercise. The idea was to capture your enemies alive, because the most noble thing you could do was bring your captives back and sacrifice them in your temple,” she said.

“The Spaniards were very different. They defeated the Mexica by breaking the water system in Tenochtitlan and starving everyone into submission—including women and children, whom the Mexica would never harm in battle, because behaving like that would compromise their sense of what it means to be human. So, to the Mexica, the Spaniards were horrible barbarians.”

Mundy’s message in the book, and in her research overall, is frank: History does not belong solely to the winners. We have to be attentive to other historical accounts—from both the conquered as well as the conquerors.

“There’s never just one historical narrative. The victors may get to tell their story first, but there are these other enduring stories that belong to other groups of people, and it’s important to understand that those histories have legacies that influenced the way the world is shaped today.”