skip to main content
Return to Fordham University
You are at:Home»Arts and Culture»Fusing Classical and Jazz

Nathan Lincoln-DeCusatis is a composer of chamber and orchestral music from the classical tradition. And he’s also a jazz pianist.

The assistant professor in the Department of Art History and Music said he infuses the classical tradition with a “jazz edge.” And it’s not just his music that departs from a purely classical approach, but also his teaching.

“You’re not studying music necessarily to become concert pianist, that’s a very old fashioned and narrow conservatory approach,” he said. “Music is just like anything else in the humanities; there’s not an exact job that corresponds to an English major. This is not a pre-professional training program or trade school.”

Fordham’s instruction, in fact, offers music students a broad humanities education along with any focus on performance, he said. 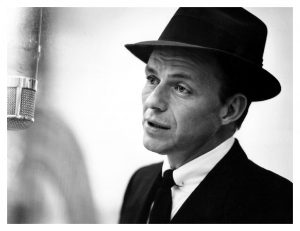 Lincoln-DeCusatis will be giving a preshow talk on Frank Sinatra to alumni attending the “Sinatra at 100” concert at Jazz at Lincoln Center as part of a sold out Fordham Alumni Culture and Entertainment event. The event marks the centenary of Sinatra’s birth. He said he would focus on Sinatra’s comeback in the 1950s.

“One thing that falls in the scholarship is there is this interregnum between the end of the big band era with jazz and the beginning of rock and roll with Elvis,” he said.

“There’s about 10 years between the end of World War II and the mid-1950s where it was all about the Rat Pack Era with Sinatra, Sammy Davis, and Dean Martin.”

It was also a period in which musicians frequently mixed jazz and classical, as Lincoln-DeCusatis does today.

“My take is there aren’t as many boundaries between those things as you would think,” he said.

Through a Fordham Faculty Research grant, Lincoln-DeCusatis is working with an ensemble composition that blends big band and chamber classical. He said it’s written for 10 musicians and is a long piece with jazz improv that straddles both worlds.

The structure of classical music and free form of jazz improvisation aptly describes Sinatra’s musicality, he said. But he stressed that whether someone improvises, or whether someone even reads music, should not be taken as a reflection of his or her musical intellect.

“Sinatra wasn’t as fluent a music reader as you think,” he said. “But had an encyclopedic musical knowledge. Think of all the tunes that he just knew off the top of his head.”

More importantly, he said, in an age when vibrato and showiness reigns as a sign of musicality, Sinatra was a subtle interpreter.

“We like to think of this guy as a musical genius who was just naturally gifted, but that’s actually a myth,” he said. “Frank Sinatra was someone who worked incredibly hard at his craft to develop his voice (and) expand his range, and he did this very, very carefully.

“For him it wasn’t about this virtuosic Mariah Carey style of musical delivery where it’s all over the place,” he said. “Something we lost in popular song that Sinatra had was a simple, clean style.”

Lincoln-DeCusatis said that Fordham has traditionally taught music by stressing history and theory, essentially couching it within the humanities. But now the program includes the more creative aspects, such as performance, composition, and improvisation. While he still teaches music theory and jazz traditions, he also provides classroom support for Fordham’s collaboration with Jazz at Lincoln Center.

Recently he has partnered with the Department of Communication and Media Studies to create a production class for electronic music. The music department equipped the communication department’s state-of-the-art computer lab with keyboards and appropriate software.

“This first class is a good split between music and communication majors and some Gabelli students in there, too, who want to make beats,” he said.

The class, he said, shows one of the many opportunities that open up to music majors when they begin to “piece things together” to seek a niche in today’s competitive and diverse music industry.

“Fordham offers this broad education that makes you a well-rounded and cultured person in general, but it’ll also support you intellectually in anything you decide to do,” he said.

Music and technology will only grow in the coming years, he said. In addition to New York’s having a burgeoning tech sector, the city remains a center of the performing arts world, one that hires as much—if not more—for the back of the house as it does for the stage.