skip to main content
Return to Fordham University
You are at:Home»Arts and Culture»Reconstructing the Sounds of the Civil War 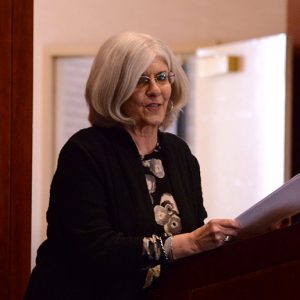 From “Yankee Doodle” rallying Civil War Union soldiers, to the use of heavy metal as a form of torture after 9/11, researchers, poets, and musicians explored the use of music in military conflicts at an April 18 conference held at the Lincoln Center campus.

The conference, “Music, the Civil War, and American Memory,” primarily focused on songs from Civil War, which ended 150 years ago this month. But music from World War I, the Vietnam War, and recent middle-eastern conflicts was evoked as well.

The cornerstone of the event was the just-rereleased original version of Walt Whitman’s Drum Taps by New York Review Books. Whitman wrote the series while serving as a hospital volunteer tending wounded and dying Civil War soldiers. Lawrence Kramer, PhD, Distinguished Professor of English and Music, edited the collection and wrote the introduction to the book, which had not been published in its entirety since 1865.

Kramer said that the Drum Taps poems mark the beginning of a modernist vein of poetry that reached its apex during World War I. It and other modernist poems represent a clear departure from heroic war narratives that defined the epic poetry of ancient Greece. Like the Civil War photography of Matthew Brady, Whitman’s poems unflinchingly document the brutal realities of war.

For veteran Anthony Romeo, a freshman in the School of Professional and Continuing Studies, Drum Taps speaks of the same realities of war found in today’s Middle Eastern conflict. Romeo served for five years in the U. S. Navy and was deployed twice, to Iraq and Afghanistan.

“The descriptions still hold true; missing the families, the holidays, and the grief and misery that comes along with war,” he said. “It’s graphic, … but being descriptive helps those who haven’t served [to]have a clearer understanding. It’s probably harder for veterans to read, but sometimes it’s a relief.”

In a talk on music’s impact on wartime, musicologist Richard Leppert, PhD, Regents Professor at the University of Minnesota, said that the public’s perception of wartime music is often steeped in patriotism.

“The guys in the field see the songs differently than the popular culture listening to it,” he said.

He noted that the World War I infantrymen changed the lyrics in the famous song “Over There,” from “And we won’t come back till it’s over, over there” to “We won’t be back we’ll be buried, over here.”

Wardrop said that the Civil War music was both “luring and lulling” and that even in battle music was played constantly. Bugle calls heralded an attack and bands frequently played throughout the battle. Sometimes bands from opposite sides competed, she said.

She described duels between Union and Confederate bands camped in adjacent fields. At Spotsville, Kentucky, a New Hampshire soldier recorded that the musical exchange was so aggressive that it ended in volleys of actual ammunition. At Stones River, Tennessee, a Union band played “Yankee Doodle” while a Confederate band played “Bonnie Blue Flag.” Eventually, they ended as one band playing “Home! Sweet! Home,” as tens of thousands of Confederate and Union soldiers sang together.

The event culminated with a concert for tenor and piano, featuring a musical setting by Kramer that was inspired by Wardrop and Whitman’s poems, Whitman settings by Kurt Weill, several Fordham students, and others. The tenor was the internationally renowned Rufus Müller. Pianist Julia Hsu accompanied him.