skip to main content
Return to Fordham University
You are at:Home»Arts and Culture»Movie Poster Exhibit Pulls from Politics 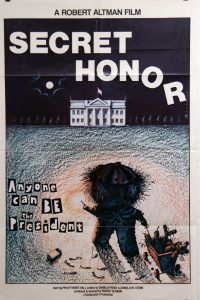 For those who can’t get enough political theater this election, there’s a new show at the Ildiko Butler Gallery celebrating election season with movie posters that revel in the world of politics.

Some of the posters are iconic, like Robert Redford in The Candidate, or Redford and Dustin Hoffman in All the President’s Men. Warren Beatty makes a couple of appearances as well, once in a poster for the 1998 comedy Bulworth and again in 1974’s The Parallax View. Directors Stanley Kubrick and Robert Altman are there too.

The show, “Politics: Movie Images from Posteritati,” was organized by Mark Street, associate professor of visual arts, and runs through Dec. 1. Street said Posteritati is a SoHo Gallery that sometimes lends out its collection exhibitions—as is the case with the show at Fordham.

“It’s interesting to see real events refracted through spectacular mass culture,” said Street. “In the collection we chose there’s satire, irony, exaggeration, fear, and paranoia. With the benefit of hindsight we can see that a lot of things that were there are in the present elections.”

On a purely visual level, the movie posters are one of mass marketing’s cleanest conveyors of information, he said.

“In the art department, we teach visual literacy,” he said. “More and more we’re in a visual culture, and these posters show that when you telegraph something without words, a short rudimentary graphic is important.”