skip to main content
Return to Fordham University
You are at:Home»Arts and Culture»MFA Playwriting Graduate Lands Original Production at Roundabout
UPDATE: In February, Weiner was one of six writers awarded a Tow Foundation grant of $75,000 per year and a yearlong residency at the Roundabout Theatre.
A graduate of Fordham’s MFA in playwriting will see her play brought to life this fall at Roundabout Underground, a subset of the Roundabout Theatre Company that focuses on new works by emerging artists.

The production marks a major off-Broadway success for Jenny Rachel Weiner, GSAS ’14, who was a member of the MFA program’s first graduating class. Her play Kingdom Come will kick off the 2016-17 season at Roundabout.

“This kind of accomplishment is extremely difficult,” said Elliott Fox, co-director of the Fordham/Primary Stages playwriting MFA program. “The field of playwriting is tenuous at best. There’s no way anyone, particularly an early-career writer, can guarantee that an established organization will take interest in her work. 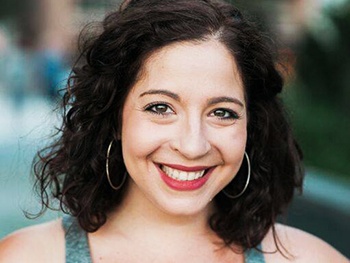 Kingdom Come, which tells the story of two lonely women who venture into the world of online dating, will run from Oct. 7 through Dec. 18 at Roundabout’s Harold & Miriam Steinberg Center for Theatre.

In addition, Weiner’s play Horse Girls, was recently picked up by Samuel French, the largest publisher of plays and musicals. Weiner wrote Horse Girls, a dark comedy surrounding the insecure and obsessive world of pre-teen girls, while she was a Fordham student.

“What’s remarkable about Jenny is that she’s self-motivated. She was able to take everything she’d learned both in the MFA program and prior to joining the program and begin to develop this relationship with Roundabout,” Fox said. “We [in the program]knew the potential Jenny had and we were excited about her talent.”

“It’s very personal for the writers so that they can create relationships with all of the amazing artists around them and not get lost in lecture halls or large symposia,” he said.