skip to main content
Return to Fordham University
You are at:Home»Arts and Culture»Mainstage Theatre Plans Season of “Strong Women”

What is a strong woman? How do they emerge? How do we encourage more women to stand up?

These and other questions will be central when Fordham University’s Mainstage Theatre season opens on Thursday, Oct. 7 with a play that tackles interracial romance in the deep south.

Alice Childress’ Wedding Band: a Love/Hate Story in Black and White, recounts the story of Julia Augustine, a black woman who engages in a 10-year relationship with a white man in 1918 South Carolina—even though miscegenation laws forbid it.

“Julia is a strong woman because she struggles with a set of choices in life,” said Jones. “Do you follow your heart, knowing it leads you to violate the laws of society (even though they are unjust?) Do you speak the truth to people even though you know it may cost you favor? Do you confront the ills in your society, even though there are severe consequences?”

“She is someone of considerable moral and ethical substance and deep longing to find justice,” he said.

Julia is also the first of several strong female characters to be featured in a Fordham season that, according to Matthew Maguire, M.F.A., director of the Theatre Program, will give voice to those groups that have been marginalized.

“We have a unique opportunity at Fordham to produce seasons that commercial theatres don’t dare,” said Maguire. “ And to weave issues of social justice into our programming so that our audience will perceive over time that politics and entertainment are powerful partners.”

Maguire said that there is a broad movement underway in the theatre world, referred to as “50/50 by 2020”, which strives to bring equal gender balance to the number of playwrights being produced and to production directors. The play by Childress fulfils that goal and also hits on many of the season’s themes, he said.

Although Childress composed the play during the height of the civil rights movement in the mid-sixties, Jones and Maguire explained that it was considered “too controversial” to be produced at the time. It finally made its debut in November of 1972 at the New York Shakespeare Public Theatre, directed by Joseph Paap.

Following the production of Wedding Band, the Mainstage Theatre will produce three more plays during the season:

The Way of the World, by William Congreve, a Restoration comedy about women taking charge of the terms of courtship at the historical moment when females can act on the English stage for the first time.

Bulrusher, by Eisa Davis, is about a young black clairvoyant with a gift of second sight and yet cannot “see” the woman who gave birth to her.

The Good Woman of Setzuan, by Bertolt Brecht, is about a prostitute’s fight to be good in a world filled with exploitation.

“The work we mount on our Mainstage sends subtle and not so subtle messages to our students and our audiences,” said Maguire. “And there is much we can learn from exploring the infinite facets of a woman’s strength.” 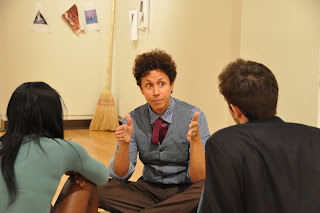