skip to main content
Return to Fordham University
You are at:Home»Arts and Culture»Law Forum Adds Short Film Competition to Festival 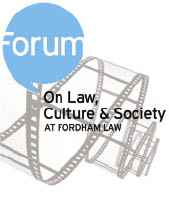 The shorts, which will be shown on Oct. 22, are part of a new film competition that’s open to anyone with a video camera and an interest in law and legal issues.

The deadline for submissions of 15 minutes or shorter is July 27 at 5 p.m.

Erin Bundra, the director of the short film festival, said she’s hoping to expand the range of entries beyond murder mysteries and courtroom dramas that are usually associated with law-related films.

“Those are certainly acceptable, but we’re trying to make it open to a wider audience,” she said. “It could be drama, a comedy or even a musical. It should still have something to do with justice and the legal system. Some of the entries I’ve gotten so far have been documentary style.”

“If you look at the films the forum has shown in past years, a lot of them are courtroom dramas, but some of them deal more with the effects of law on society.”

Last year the forum showed Too Big To Fail, which was about the economic collapse and governance.

Top entrants will be screened at the festival, with awards going to the top three films, the best screenplay, and audience favorite.

The winning entry will receive a $100 ATM card, courtesy of TD Bank.