“At Fordham, we don’t offer an official Korean course. But there has been this growth of interest in Korean culture and language,” said Hie-Myung Jo, Ed.D., associate director of the Institute of American Language and Culture, which hosts the workshops. “This was a good time for us to provide them that opportunity to learn.”

Two years ago, the institute received a grant from the Korean Education Center to offer a free Korean language workshop to Fordham students; in fall 2019, they held an elementary Korean language pilot workshop for about five students. The following semester, the workshop expanded to include about 15 students. When the workshop was offered for the third time in spring 2021, albeit virtually, the number of students continued to grow.

This fall, there are now three Korean language and culture classes for more than 40 students at the Lincoln Center campus. On Wednesdays, students can attend a beginner’s Korean workshop at 1 p.m., a low intermediate Korean workshop at 10 a.m., and/or a Korean culture workshop at 4 p.m. for an hour-and-15-minute session.

“I hope the students will become more confident about learning a new language and expand their perspective as a world citizen,” said the instructor for all three classes, Kyung Eun Lee, who has taught similar workshops at Columbia University and New York University.

Lee teaches a beginner’s course to students in Lowenstein on Wednesdays.

The workshops bear no credit, but they will appear on the students’ transcripts upon successful completion. More importantly, said Jo, the classes will help students learn to appreciate other languages and cultures and become global citizens.

“One of the main purposes of these classes is to provide a fun, free, practical opportunity to learn the Korean language and explore aspects of the culture. This could be an especially good option for students who plan to study abroad in Korea and those who want to learn more about Korean heritage,” Jo said.

Some of the students are Korean Americans who want to learn more about their heritage, like Davis Pak, a sophomore at Fordham College at Lincoln Center. He said he grew up in a household where his parents mainly spoke in English with him, but he wants to be able to communicate better with his extended family members, especially his cousins and grandparents.

“I saw this class as an opportunity to refresh my memory and learn new words and phrases,” said Pak, whose Korean name is Saejoon. 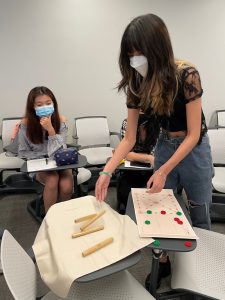 Students learn how to play Yut Nori, a traditional board game in Korea.

But most of the students are not Korean. Many of them are fans of South Korean pop culture, especially the music and dramas, who were inspired to learn the language behind the culture they love.

“I want to learn the whole language,” said Rayne Davila, a first-year student at Fordham College at Lincoln Center. Davila is a K-pop fan who taught herself the Korean basics during the pandemic with the help of a Talk To Me in Korean workbook and routine FaceTime sessions with a friend. “I want to be able to talk fluently and go to Korea one day.”

Tara Salem, also a first-year FCLC student, said she wants to not only visit South Korea as a tourist, but also work in the country.

“I’m studying business, and that’s a very big field that can allow me to work abroad. I want to work in Asia at some point, so it might be good for me to have a basic understanding of the language and the culture,” said Salem, who majors in economics.

Last summer, she tried to teach herself Korean. Salem became a fan of Korean dramas during the pandemic, including popular shows like Crash Landing On You and It’s Okay to Not Be Okay, and said she wants to be able to enjoy her shows without English subtitles.

“Everyone here is interested in Korean culture, whether it’s watching Korean dramas or listening to music,” said Salem, who plans on watching Squid Game, a South Korean dystopian show that currently holds the most-watched title on Netflix. “It’s nice to have a community in that sense.”