skip to main content
Return to Fordham University
You are at:Home»Arts and Culture»Inside Out Transforms Lincoln Center Campus Space

The printer wouldn’t cooperate and a shower cut short the pasting. But for a few hours on March 25, Fordham’s Lincoln Center campus was abuzz with creative energy, as a blank concrete wall alongside the Lowenstein Center was festooned with oversize paper portraits of people from the community.

The team of Inside Out, a project by the artist JR, parked a customized box truck and photo booth on West 60th St. Project volunteers asked anyone walking by if they wanted to have their picture taken inside, for a larger-than-life-photo posting on the wall. 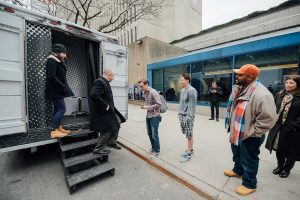 People wait to have their picture taken inside the Inside Out truck.

The project, which had been brought to the campus by the University’s Urban Studies program as part of its distinguished visitor series, attracted a medley of characters for their portraits. Residents of nearby buildings, members of the Fordham community, and teens walking from their school on Amsterdam Avenue to the nearby subway station lined up to be photographed. The visitor series is funded through a grant by the firm Podell, Schwartz, Schechter & Banfield, of which Bill Banfield is a 1974 graduate of Fordham College at Rose Hill.

Technical issues forced the team to print the portraits at their SoHo studio (and not in the truck, as planned), leading to a lag during which they were only able to take pictures. But once they began wheat-pasting photos to the wall, the event, which has taken place in cities internationally, began to take shape. The crew hung 28 portraits before rain forced an early closure.

The Inside Out team will return to the Fordham on Monday, March 30 to paste the rest of the approximately 100 portraits that were taken.

Mark Street, assistant professor of visual arts, said he first encountered Inside Out in 2013 when the crew photographed 6,000 people over three weeks in Times Square. He liked the project’s simplicity and accessibility to the public, so he approached the group on behalf of Fordham.

“Photography has always had a home movie, home picture sort of feel. This project takes street photography and makes it personal by taking literally anyone’s photograph and putting it on the wall,” he said.

The fact that the project was open to those outside of the Fordham community was important too, he said, because although Fordham is a private university, it shares a lot of space with the general public.

“The idea of Inside Out is to play with that liminal space of the public and the private a little bit. At its best, this wall will be an amalgam of whoever happens to wander by,” he said. 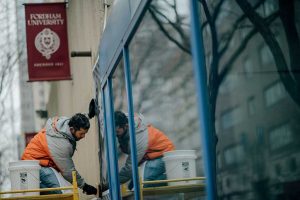 The team pasted 28 portraits before rain stopped them.

One random passer-by was Jacqueline Gonzalez, who was walking with her four-year-old daughter Mia back to their apartment. Mia, who proudly showed off her “funny face” for volunteers, had her picture taken; mom was camera shy. She loved the project though.

“It’s really busy around here, and I don’t really stop that much. But now that there’s art here, maybe I’ll stop more often,” she said.

Victoria Monaco, a junior at Fordham College Lincoln Center, found out about the project that morning and came by. She said street art is integral to New York City.

Vincent DeCola, SJ, assistant dean of students at Fordham College at Lincoln Center, made sure Fordham administration was represented on the wall. He counts himself a fan of public art, something he said the wall on West 60th St. sorely needed.

“Personally, I don’t like walking down a street with a big cement wall,” he said. “I’ll often go down another block where there are stores or activities.

“Its great to bring some life, and it’s sort of like the face of Fordham.”